It's been a month of chef shuffling over at RN74. Executive chef Seis Kamimura left to head up the culinary program at CenturyLink, pastry chef Kim Mahar's last day was Saturday, and now word that Michael Mina has brought in the big guns to shake things up at the downtown restaurant (now billed as a modern French bistro).

Assuming kitchen duties is David Varley, the corporate whiz-kid for the Mina Group and a young chef with an impressive pedigree, having earned Bradley Ogden in Las Vegas its first Michelin star after being hired on as Chef de Cuisine in 2005 (making him the youngest recipient of the award). He also won Food & Wine's Cochon 555 in 2010. Like, the whole thing.

The most notable change at RN74 is a brand new menu format with new food items slowly rolling out. Says Varley:

We felt a dramatic change in the formatting of the menu would allow it to relate more to our guests and lead them to discover the restaurant in a different manner than the previous format. I see a menu as a treasure map that has many routes to the same end. This format relates more to the concept and is easier to understand and is more fun for the chef to work within than a more ambiguous format.

As far as the food is concerned, Varley says the goal is to tighten it up considerably. "We want people to love this place as much as we do, to continue to find reasons to come back and be a part of the restaurant." 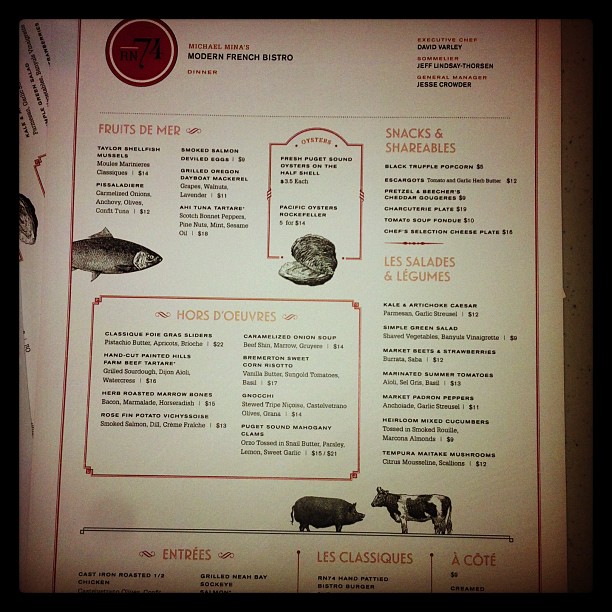 A sample menu from RN74

Not only is the menu broken into several categories, it's also less expensive.

A wake up call for me was looking at the menu and realizing that prices had crept up to a point where it was challenging to provide value. A lot of effort has been in service of softening prices while increasing quality and value perception through smart purchasing, partnerships with vendors and farmers and a slightly more casual approach to some things (i.e. buying Neah Bay sockeye salmon directly from the fishermen, cutting thick steaks as opposed to trimming 60% of it into little blocks and not apologizing that the fish is served on the bone in all its glory). I'd rather eat that anyway and it allows us to soften pricing while serving a much higher quality product in a fun format.

Look for Varley to remain on the RN74 Seattle team for some time, while he maintains his global role with the Mina Group. "I'm focused intensely on achieving our goals for the restaurant and making the most of my time here to get back to my roots as a cook, roll up my sleeves and focus on food in one location."