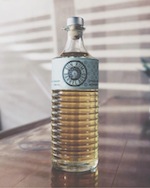 Which airline serves the best in-flight booze? According to Thrillist it's Alaska Air, which crowns their Top 10 list in part because "they've actually partnered with a local Seattle distillery to stock handcrafted spirits like UNXLD Vodka, 100-proof Gun Club Gin, and a bourbon/ sherry barrel-aged rum." And that distillery blind item is none other than Sun Liquor, which announced its airline partnership last week. [Thrillist]