Brady Sprouse on Not Standing Still & Not Being a Dick

Share All sharing options for: Brady Sprouse on Not Standing Still & Not Being a Dick

Brady Sprouse has a way about him that is hard to pin down. The man has been a bartender at some of the most popular bars in Seattle, and although you've probably (at some point) asked him to make you something special, you might not know his name. Which is fine with him.

These days, you can find him behind the bar at Oliver's Twist in the Phinney-Greenwood neighborhood and at Smith on Capitol Hill. And though he's been around a bit, he somehow always seems to be the guy that people talk about with a smile. It's not uncommon to see him pop up in an old stomping ground for a guest bartending shift. Everywhere he goes is lucky to have him.

Can you give a quick rundown of where you've worked and how you became a bartender?
I started cooking at Alki Cafe in 1999 when I moved here. Then I worked at Cutter's, Luna Park, Jitterbug, Tango?I was a sous chef there and I decided I wanted to bartend. So they gave me some shifts barbacking and hosting. Then I went to Hattie's also, and picked up a couple shifts as a server and barback — maybe their last one ever — and then bartending shifts opened. I was there for six years. And Revel, Cicchetti, Tavern Law, Still Liquor, Hazlewood, now Oliver's Twist and Smith.

Understatement of the year: You've kind of bopped around a lot, yeah? But you tend to stay at places for a while.
Is that a question? Yeah, I like to stay at least a year, you know, unless something comes up. I was at Revel for 8 months and I was really trying to figure out how to break into the craft cocktail thing on my own, but the execution and organization aspects weren't quite there. And when I had the chance to move over to Cicchetti, it was a really good timing thing. I also worked at Tavern Law for more than a year, but I keep everything above board. I pick up shifts here are there. I worked at Still once a week for two years. I went back to Tango. 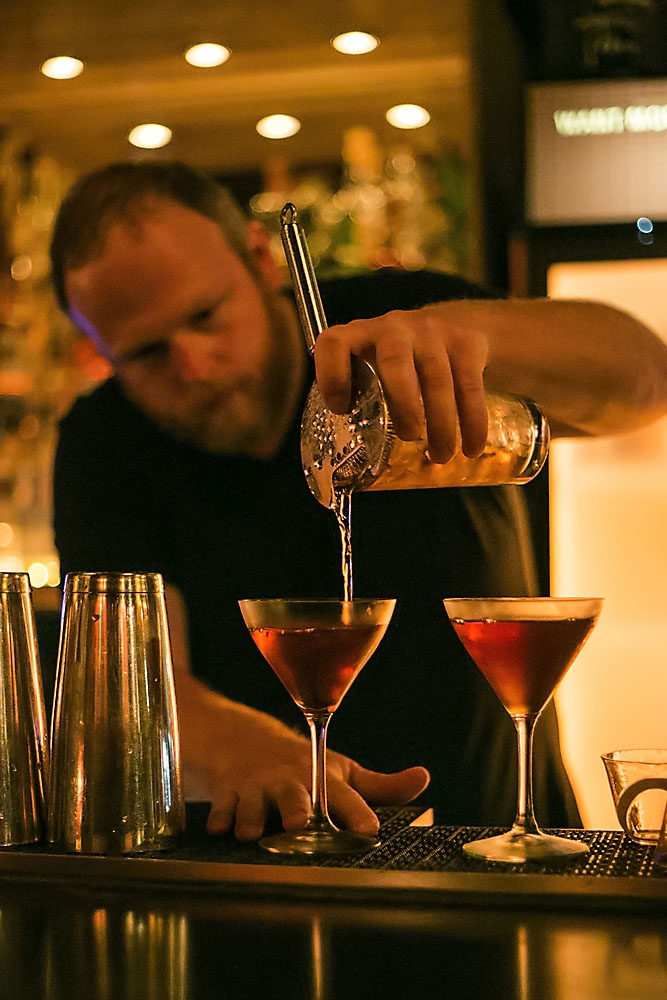 How did you end up doing all of that and why did it work out?
You never get burnt out, you don't get involved in anyone's drama. It keeps me fresh. I like to think it keeps me nice. You know, whatever.

Hazlewood came about because when I was working at Cicchetti, I was there three days a week and was really looking for one more day. For some reason, even though I was working a ton, I needed more. More regularity, more money.

You are a dabbling pro. Like, you used to work with The Maldives. How did that happen?
Hattie's Hat. That's where I met (band members) Jason and Jesse and we all hit it off really quick. And that kind of became — I mean, it already was — but it became more their hang out. And we did a listening party for Listen to the Thunder and a guest bartending thing. And after I had split with the girlfriend, I didn't know what to do. And I was going to move to Portland but then a friend was like, "No, you have all these friends here!" So I stayed.

Wow, that was an easy sell.
Ha, yeah, and then we went on a little road trip and I became quote-unquote "tour manager" for them after that. Mostly, just, you know, selling merch and making sure they had everything they need and whatever. Eventually, I was getting more into bartending and my weekends weren't as available as they used to be, so that kind of fell by the wayside.

Are there other famous-y people or Seattle mainstays that hang out at your bars?
Um, I honestly don't know. I don't really think of it like that. DJ Rizz (from KEXP) hung out at Tango a lot. I've seen him in Smith. I love that man. He loves me, but I don't think he knows my name. I don't mind being the "unknown bartender." I'm not doing it to make drinks for famous people. I love bartending and I'm a nerd for cocktails. I've got the bug. I think because I used to be a chef and a cook, it's just sort of a natural progression.

Yeah?
Sometimes, yeah. When it comes down to, like, the chemistry of cocktails, sometimes I'm pretty ignorant because I'm terrible with chemistry. I actually hid from chemistry in high school, but the idea of putting flavors together was something that I've always been good at. Once I learned the mechanics of cocktails, it became more about just knowing what goes good together. Like, "I know this goes with this, but what about that?"

What's been your greatest success with weird marriages of ingredients?
Mezcal and Rhum Agricole together has been pretty cool. Tequila and Scotch. I try to be as much of a purist as possible without restraining myself or being shackled down to that. Sometimes people get too limited and stuck with the purity of cocktails, and it's like "Well, tastes have changed in the last hundred years." 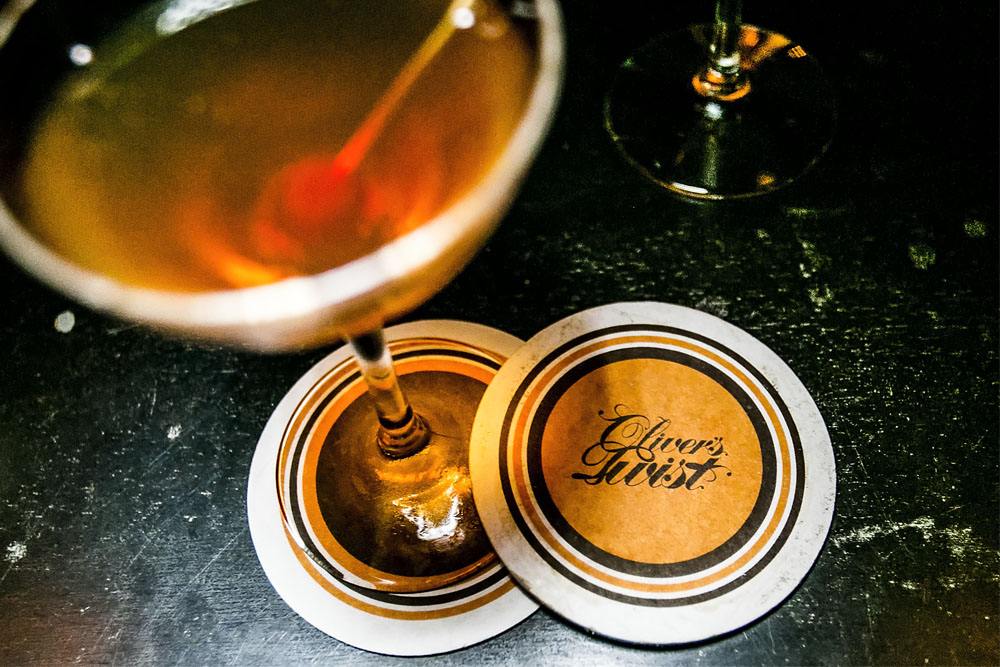 Like an ounce of Vermouth in a Martini?
Actually, if it's a good Vermouth?but yeah. And also, the Vermouth people think of is the Martini & Rossi stuff that's been oxidized for four years on the back bar of some place. The better ingredients make better cocktails. It's simple. And we're lucky that people are getting in that swing.

What do you drink?
It depends on the day and the time of year. Right now, I'm drinking a lot of gin and rosé, because I'm a man.

I've been drinking a lot of beer lately. I've never been a beer drinker, but in the last year, I've started to kind of open up my palate to the craft beer thing — without ruining my palate with the giant hop monster beers that the Northwest is famous for. But now I'm on a quest to find a really good, balanced beer that's not overpowering.

What's your drink that was on the menu at Oliver's?
The Merry Old Gentleman. Rye whiskey — we were using Old Overholt, but the spice of Rittenhouse would be a little better — Meletti Amaro, Cynar, and Zirbenz stone pine liqueur. I have a few on the Smith list, and I was really proud of the ones I have on the Tavern Law list.

What drinks do you hate making?
None of them. I mean, there are drinks that are cumbersome to make if you're really busy. Like the Ramos Gin Fizz, which is fun once, but not in batches of 10 on a Saturday night. How can I say no? It's a delicious drink, but it does throw a wrench in things. A Spanish Coffee is the same way. 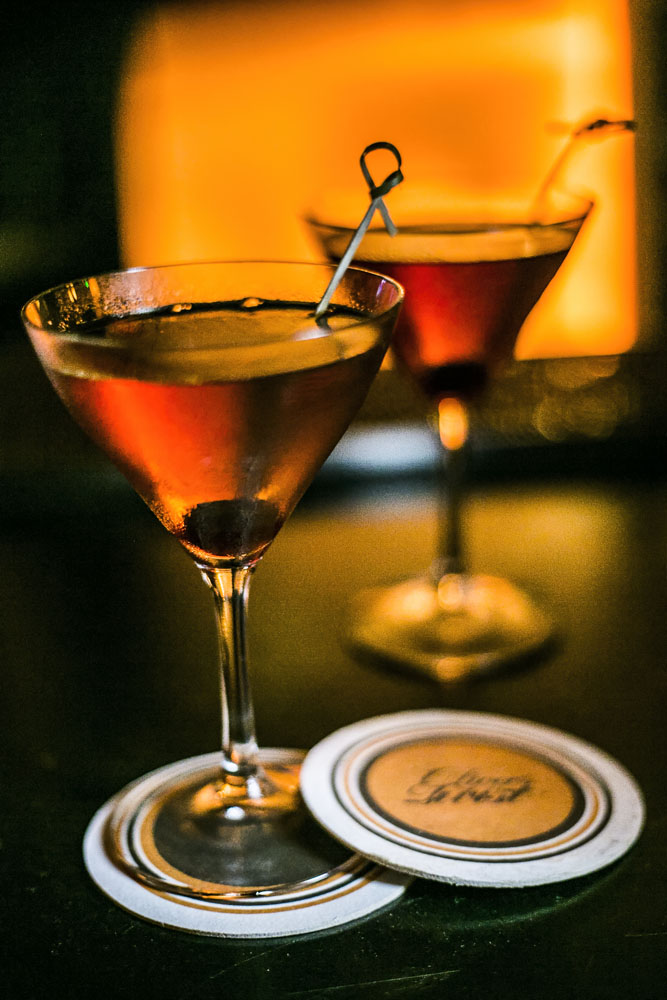 Is there ever a time when you make someone exactly what they asked for and they hate it?
Yeah, of course. But usually I'll just try to dive into their mind and zero in on what it is they are actually wanting.

You're just so nice. It gives the rest of us a bad name.
At Hattie's, when I was younger, I had more of that attitude of "fuck you, I'm a bartender" — that dive bar attitude where you sass cuz you can. But as I got older, I realized there are ways to exist in that environment and still be sassy and crass if you want to be, but in a professional way, and give people what they want.

I heard someone say it, but I totally agree. They said, "I'm not a tastemaker. I'm not here to make you drink a certain thing or feel a certain way about it." And that's exactly right. Working with Robert (Rowland, at Oliver's Twist) has been great because Robert and I have very similar attitudes about service. And if a little bit of that slips out, he brings it back and helps me remember what it is I'm doing, and what I'm doing it for.

That was the one really frustrating thing at Tavern Law. People would come in there with the forgone conclusion that I was going to be the biggest pretentious dick in a vest and a tie.

[Laughs] As soon as I put on that vest and tie, it's all about "There's no vodka in this house." There's a self-fulfilling prophecy. I'm not going to be rude to anybody, but I'm not going to go out of my way?I'm going to give the person the best service I can, but I'm not going to go above and beyond if you're going to assume I'm a dick. That's why Smith has been really nice, because it's so much more neighborhood-oriented. People come in off the street from around the area, and Oliver's is like that too.

Oliver's is such a weird place?
I know, I love it. Here's the difference between Tavern Law and Oliver's Twist. At Tavern Law, I feel like people are all [gruff voice] "Hey, I hear you guys make a good drink. Why don't you make me something!" And at Oliver's, people come in and they're like [soft, fluffy voice] "Heyyy, I hear you guys make a really good drink! Can you make me something? Thank you so much!"

What makes you feel joyful to be at one bar versus another?
I don't know, I guess it would be a sense of community and family. Whether it's with co-workers that are really nice to work with, or guests — people who have been coming in for years, or just come in off the street for the first time. You can just tell, and it's generally neighborhood-oriented bars that have that, those are the places I want to work — places like Hattie's Hat, like Hazlewood, like Cicchetti, like Oliver's.

People are more laid back. There isn't the pressure of, like, "Make this time fun for me." Even if it's a destination spot, it's like "Relax, we'll get there, we'll figure out how to get from point A to point B." 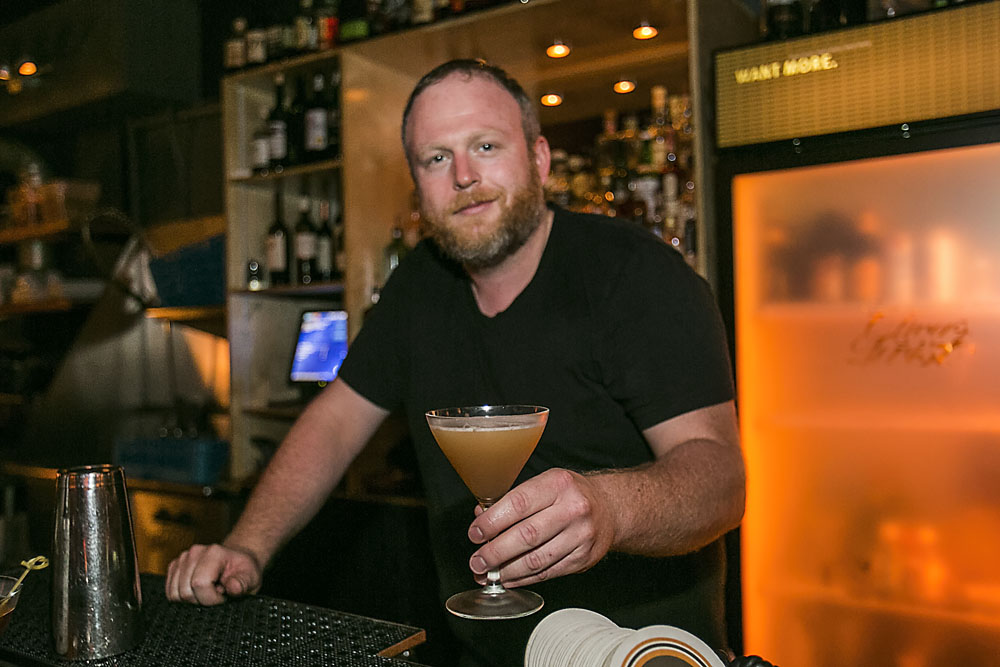 Where do you go drinking when you're not working?
I try to go see friends who are bartenders. I'm able to go to Liberty now and I go see whoever's working. I love Rumba. Do you know Kate Perry? Just Kate, not Katy. She's the GM of Rumba. She took my place at Cicchetti after I left. Connor and Nabil, too.

What makes you stay somewhere as a customer if you don't know the bartender.
Good atmosphere, polite service. Good spirits list — back bar. Someone who's just marginally polite to me. If it's for cocktails, well-crafted cocktails.

Do you have a tamago? A benchmark for places?
No, I know other people do that. I guess it would be like a Manhattan. I can usually get a good read on a bar from the decor, atmosphere, the people working. I can usually tell what might be a safe bet and what would be a stretch. I might sit and have a beer and a shot and then maybe an Old Fashioned, if I feel like I can get one of those.

— Julia Wayne is a freelance writer, Assistant Editor at Wetpaint, and former bartender.