Share All sharing options for: Maria Hines One Year After Opening Agrodolce 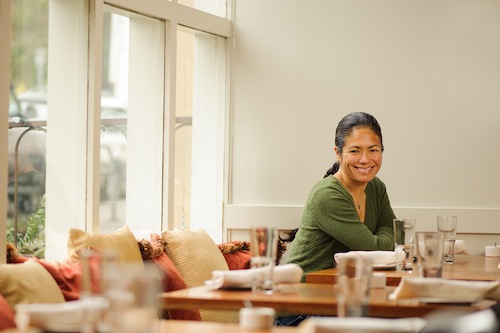 Few Seattle chefs have established such a following with just one or two restaurants, but Maria Hines is certainly among them. Before she even had a spot of her own, she had already been named one of Food & Wine's 10 Best New Chefs in 2005. She opened flagship Tilth in 2006, was awarded the James Beard Award as Best New Chef, Northwest in 2009, and in 2011 opened Golden Beetle.

Now, a year into her third restaurant, Maria proves she is still at the top of her game by bringing Southern Italian food to Fremont with Agrodolce. The Oregon Tilth-certified trattoria turned one recently, and Eater took some time to check in with the chef-owner about growing pains, meeting lambs, and finding the right hum for the new restaurant.

Happy birthday. How has the first year gone?
Really good. Smoothest opening out of the three, so I'm really happy about that.

What has made its opening different than Tilth or Golden Beetle?
Practice, I think. Yeah, practice, and the third one — it just gets easier. The systems are in place and you take the notes from the last opening and apply them to the next. Definitely a lot smoother. Having the structures to put into place really makes it more settling for the restaurant; it can come into itself more quickly. 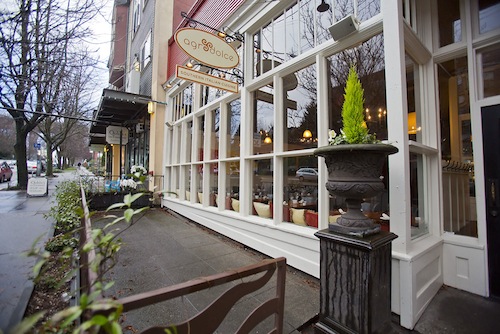 How do you find that you divide your time having three restaurants as opposed to having two or one? Is it twice as hard? Three times?
It's three times the work, but the workload has changed a little bit because there's more support, and as I've grown, I've put more structures in place; I'm working more efficiently because I have to. So, I'm able to accomplish the same amount in all three restaurants that when I had only Tilth, I could accomplish only at Tilth. [I'm] working smarter. I've become a better trainer with my managers, and I can develop them at a faster pace, because I've become better at that. And they're the ones who really make it happen, because without them, these restaurants are really not where they need to be with the standard of excellence. And trusting them, hiring the right people who are really self-motivated and share the same vision that I do for food and service.

How has your menu concept changed, if at all, since opening?
It hasn't changed at all, really. It's subtle improvements. I think it's more improvements that we see internally than are seen externally. We're just exploring the pasta world and playing around with different grains and such. Service-wise, we've just been refining the wine list, and we're just getting better at what we do every day. It would probably take guests a year to see the subtleties that we see every day.

It's not a focus or change, really, just a refinement on what we're doing. There's no directional change that has happened, we're still going in the same direction, it's just tighter. We're continuing to move forward with our vision. 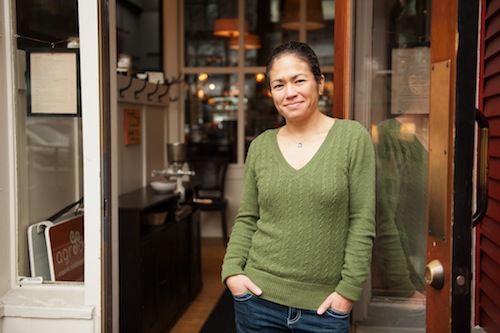 How did you find opening an Italian restaurant in Fremont?
Really good. I think it was great because there isn't a lot of Italian food here. So the locals and the destination diners feel happy to have that option. It's a lot of neighborhood people during the week, and then on the weekends, it becomes more destination.

You have some pretty esteemed nearby neighbors in Fremont these days. Do you think with the openings of the other great restaurants in the neighborhood — Joule, Whale Wins, Roux, RockCreek — you've had more competition, or has it just given you more of a draw?
I think it's definitely had a positive effect. There's more kind of "adult restaurants" to go to. So, it helps bring a different demographic into the neighborhood. There are two ways to look at it: You can look at it as competition, or you can look at it as collectively bringing more people into one area, and I look at it as bringing in more people.

You've made interesting choices with the breadth of cuisines that you represent, with New American, Mediterranean, and Southern Italian restaurants under your hat. How do you choose the next style, and were you tempted just to recreate the success of Tilth in a new neighborhood?
I like the challenge and doing things different. It needs to be really engaging for me, it needs to push me. So, coming up with different concepts as far as service and price point, that's different in itself. But then coming up with different concepts from a creative standpoint really pushes and inspires me, and I think it really pushes and inspires my team. We're building this Maria Hines Restaurants business together, and to keep all of us really excited and engaged, I look and hire for people who have that voracious appetite for new, creative, and engaged. I'd be bored if I did the same thing over and over.

How do you prepare for opening the kinds of restaurants you do?
I explore, going into new realms of cuisine that I don't necessarily know a lot about until I do the research. I travel to those countries, and spend a lot of time in them, like Sicily for Agrodolce. 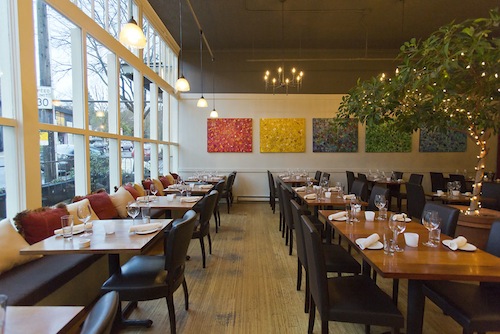 What are some of the common threads between your restaurants?
They're certified organic, they're all culinarily driven from a technique standpoint and from a creative standpoint, and the service is really knowledgable – they know the food inside and out. We do tours every other month to visit the farms and producers that we work with, front and back of the house. We get lambs from Aspen Hollow Farms, so we go there together during the lambing period in the spring. We'll go out to Skagit River Ranch and do the tours there, and hear about grass fed beef and how they care for them and the soil content. Or we'll go to Theo's, and hear their philosophy and kind of go through their process of creation. So, I think that's something that keeps it front of mind, that we're doing something really cool, really special. That spirit that all three houses have, that we're psyched about food, we're psyched about service. We love the community that we've created through food, the guests who are coming in, and the purveyors we work with.

What are your big goals for 2014?
This year is about making sure that what we're doing at the current three properties is perfect and at the level of excellence that we're striving for. For me, it's really important for me to grow, but grow in a sustainable way, where everything we do is as it should be, before opening up the next one.

I'm not in a big hurry to make money. I mean, I have organic restaurants, full service style restaurants with big overhead, so money isn't my goal. I open a new restaurant because I want to build something, I want to create something that's really special and unique. So, I'll wait for these three to feel completely where it needs to be at before I take on another. 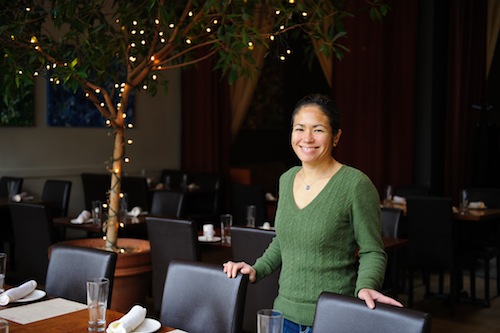 Do you already have your next destination in mind?
I don't know. I'm not entirely sure yet. I would ideally like to open another restaurant, but I'm also okay with not opening another restaurant. Maybe I'll just have these three, so I'm just staying open to the whole process. Evolution will happen, but there will be evolution in one way or another.

Your restaurants always have a really minimal interior design, sometimes with just a little touch, like the lights at Golden Beetle. What's the reasoning for that?
Yeah, that's intentional. I think being a chef, if you're in a restaurant and we're trying to push ourselves in the kitchen to produce really inspiring food. I think whatever's on your plate, and who you're sitting with, that's all that should really matter when you're in a restaurant. It should be memorable, and they should think "Wow, that's really amazing, how did they do that?" The food is simple. The food is simple, but there's a lot going on at the same time, from a technique standpoint, from a sourcing standpoint, from a sourcing standpoint. A lot of it's pretty simple, so I think the room kind of translates that as well. The room is minimalistic and simple, and the food is minimalistic and simple, albeit with a lot of love. There will be four ingredients on the plate, but we're showing it in a few different ways. It's the hardest way to cook.

How does the simple way of cooking affect your ability to experiment?
We try to get as artisan as we can. Milling our own flour, and making our own breads at all three locations. I'm really fascinated with raw cooking techniques. Because of health benefits and that kind of stuff, but also just the artisan purity of it. So, we're like sprouting things, we're fermenting things, we're cold-smoking things. So in all three houses, we have sprouted nuts and sprouted seeds, and I'm making carrot jerky, where we're cryo-blanching carrots with ginger in carrot juice, and then do that for a day, and strain it, and smoke it, and then dehydrate it. When you do it in the cryo-vac bag, you put it in the freezer, and when little pockets are formed, carrot and ginger juices infiltrate it instead of ice crystals. And we're fermenting sauerkraut and all that. I was telling my chef, Mason, who's the Executive at all three places, we're so far out in front, that we're like coming from behind. It's old way cooking. It's a living thing, and you just get to play with your palate, taste it every day. Is it too cold? Too hot? Too much air? Not enough air?

If you open another restaurant, will you keep it west of I-5?
Yeah, it's kind of my corridor. I like being west of I-5 and south of the Fremont and Ballard Bridge. I like neighborhoody restaurants. I've worked in downtowns all my life, and it's a different vibe and different clientele, and we have the nicest guests. I think it's because… transient guests are nice too, if you're a destination restaurant, and they come for the experience, they become part of the experience. And the neighborhood guests, they are the experience. It's very community-driven, whereas if you're downtown, you have a lot of hotel guests, and they're just there to get fed sometimes, or there are so many different purposes for them to come in. It's hard to get some sort of sense of cohesiveness, a place of gathering for good, sustainable food. The right level of…. hum. I'm always thinking, "How do I capture that? How do I have that spirit in a restaurant?" That's what makes the experience, I hope, for people who come in.
· Maria Hines Restaurants [Official Site]
· All One Year In Coverage [~ESEA~]