PUSA's Chris Ballew on Why He Eats 'Small and Bitter'

Share All sharing options for: PUSA's Chris Ballew on Why He Eats 'Small and Bitter' 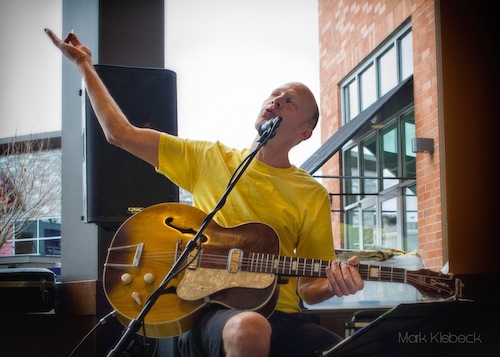 In 1996, Seattle's The Presidents of the United States frontman Chris Ballew sang about movin' to the country and eating a lot of peaches. But as a touring rock and roller, his diet was more "a blur of starch," beer, and the occasional bite of koala and kangaroo while on tour in Australia ("It was like eating a petting zoo!") than fresh fruits and veg. Now, Chris is living la vida arugula after discovering he's intolerant of wheat, dairy and eggs. But he says he feels amazing, and whole foods taste more "explosive" now that he's given up the processed stuff.

The bottom line is you want to eat dark, bitter food. I just go to the grocery store and pick the darkest bitterest stuff. Fortunately, I like bitter. I will just take a giant bag of arugula, put it in a cast iron skillet with a little bit of olive oil and a little bit of Bragg Liquid Aminos and some toasted sesame seed oil and just fry an entire bag of arugula up, which reduces to a nice bowl of greens, and eat that. I do eat meat. I like a nice pre-cooked, organic farm raised chicken from the PCC. Tear that sucker into pieces and eat that. The Great Harvest Bakery has insanely delicious gluten-free, dairy-free, egg-free, milk free, everything-free bread that actually holds up well enough to make a sandwich out of it without toasting it. It's a life saver, it's amazing.

Dark and bitter is the exact opposite of your personality! It's like the food equivalent to the cold hands, warm heart analogy.

(Laughs) I read this amazing book called "Eating on the Wild Side" by this woman named Jo Robinson who lives on Vashon Island. It's a history book about food, about how food has been modified, the way food changes because of fashion and taste. Things have been genetically modified to be large and sweet. But the fact of the matter is, human beings really want small and bitter.

The orange carrot was created for, I think his name was the Duke of Orange. He was in the Netherlands long, long ago. Carrots were actually purple, white and red and they created the orange carrot to honor the Duke of Orange and then BAM! — we're stuck with it. The bummer is the orange carrot doesn't have as much nutritional value as the purple carrot. The original carrot is only about four inches long and it's purple and bitter. Because it's not as economically sound of a business to pick a billion tiny bitter carrots, they made them big and sweet.

What are your favorite Seattle restaurants?

Oh my God, the place I like to eat is called Thrive. That place is killer. I can pick anything on the menu and it's clean and I feel really solid and clean after eating there. The other place where I feel super clean after eating is this place called Pure on Vashon Island. It's a little tiny restaurant and on Wednesdays and Saturdays they make a pizza with a sprouted seed crust and arugula, onion, peppers. It's just awesome. That is something I actually travel to Vashon for on Wednesdays and Saturdays.

PUSA's new record, "Kudos To You," will be released on February 14, followed by a record release party on February 15 at the Showbox.
· PUSA [Official Site]
· All Open Wide Coverage [~ESEA~]