Share All sharing options for: Broadcast Coffee to Open Multi-Roaster Cafe in Roosevelt 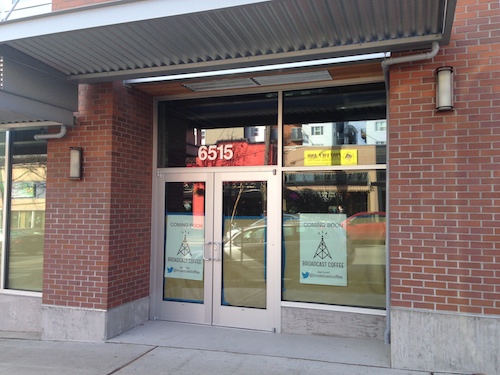 No one can complain that Seattle has any shortage of fine roasters and cafes, but with a few exceptions (see fig. A and fig. B) the bulk of the city's most exciting coffee bars can be found below the ship canal. That's why it's a big deal that Broadcast Coffee is getting ready to open its doors in the Kavela Apartments building at 66th St. and Roosevelt. Especially since that neighborhood's current coffee culture revolves around espresso machines at Starbucks and Whole Foods.

Owner Barry Faught was a coffee novice when he opened up his first Broadcast shop in the CD in 2008. He embraced the multi-roaster concept when he opened shop number two on the Hill in the summer of 2012, back when the trend was in full swing south of Washington State. A handful of other Seattle-based shops offer beans by more than one roaster, including Tougo, Neptune, Trabant, and Milstead. "The multi-roaster model came into play when I opened in Capitol Hill. With so many other coffee shops around me I felt like I needed to do something different," Faught tells Eater.

He chose Roosevelt for his third Broadcast location because in addition to a strong community, a light rail station is will open on 65th St. in several years. "I like to claim my space before things explode!," he says.

The interior, designed by Trey Jones, is taking a nod from mid-century aesthetics: "Think of a radio from the 1950's, Faught says. "There will be clean lines, brass, and a big ass gorgeous wall of wood." He's planning to pull shots from a rotating list of roasters, including Stumptown, Sightglass, Slate, and Kuma. Faught is also a partner in La Forêt. The new bakery is currently working out of a commercial kitchen in Georgetown and will provide pastries for the shop.

Expect doors to open as early as mid-April, but as always launch dates can shift. Follow @broadcastcoffee on Twitter for updates.
·All Broadcast Coverage on Eater [~ESEA~]
·Broadcast Coffee [Facebook]