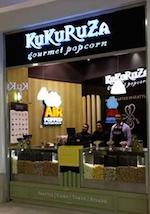 You can now eat KuKuRuZa Gourmet Popcorn in Egypt. The Seattle-based chain has served flavors like rocky road and cinnamon bun to Seattle-area residents for more than five years and has already started up stores in Japan and Saudi Arabia. Owner Grant Jones says that gourmet popcorn is "not readily available and a hot commodity" in the Middle East, so he's franchised two new locations in Cairo since the beginning of the year. Additional Egyptian KuKuRuZa outlets are planned to open in 2014. [EaterWire]