Big Gin Keeps It in the Family

Share All sharing options for: Big Gin Keeps It in the Family

Welcome to Eater Seattle's brand new column Meet the Distillers, where spirit-loving contributor Julia Wayne sits down with the folks behind the booze in your glass. In the first installation, Ben Capdeville and Holly Robinson of Captive Spirits spill (sorry) all about their Big Gin and Bourbon Barrel Big Gin. 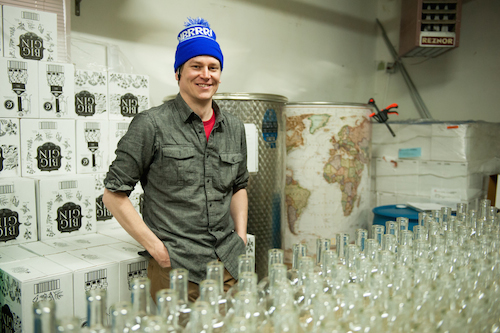 Ever wondered why gin does that glowy thing when you shake it? Want to know what you're supposed to do with a gin that was aged in bourbon barrels? The third generation Midwestern-raised distiller and the wine country born marketing mind behind Captive Spirits talk about all that, plus what they drink and what's next in cocktails.

So, you guys make Big Gin, London Dry style, and the Bourbon Barreled version… How come you like gin so much?
Ben: The reason I like to drink it is because it's the king of cocktails, and each one tastes so different. Like, "Oh, that's Tanqueray, that'll make a really great Gimlet." Gins adapt well, or work better with different cocktails than others. It's neat that you can make things taste so unique. One of things that drew us to making gin is that it's something you can make quickly, at very high quality, and be proud of. It tastes like it does because we developed that recipe. You can make it interesting, or you can not make it interesting, make it like the Pale Ale of the spirit industry. That's what we've done, it's going to work well with the cocktails I already knew.

How did you all start with Big Gin?
Ben: We signed the LLC in 2010, launched our first release right when you could start selling self-distributed spirits. We were not in business with the State of Washington ever. In fact, we were ready to go, had it all bottled up and everything, before 1183 passed, but we didn't want to mess with that. It turned out to be like a big buy back system and… it was crazy. We were like F that. It was like June of 2012 and I started selling bottles to friends behind the bar. And we did that for about six months, and then signed on with Noble.

Gin does that glowy, ethereal thing when it's made into a martini. What is that? Do you love it?
Holly: It louches ("looshes"), yeah, from the oils, when you do a martini. We've figured out ways to change that, obviously. There are ways to take it out, but we like it.

Ben: Gins around the world louche, because there's so much rich oil inside. Absinthe, Pastis… they all do that. 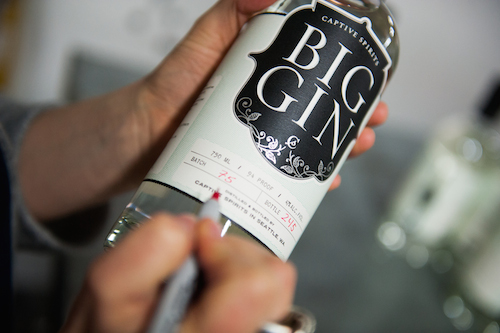 It's nice that it doesn't have to be in the bottle to have the brand. What exactly is your brand, in your vision?
Holly: When we were developing the brand, we wanted it to be real, it's simple, not glittered up by any means. It's styled after Ben. He's not going to back anything he doesn't believe in. He's a no bullshit kind of guy. We're working with Voda Studios to launch a poster campaign. We're going to do six different posters, around the U.S. to convey our brand. Like '70s, '80s style, with the spirit, the tagline, and the person, or whatever.

We're doing one that's, like, Ben, his dad, and then we're going to see if we can superimpose his grandfather, so it will be three generations of distillers. Those will be out kind of a few at a time, to go places that sell Big Gin, or bars can have them. Liquor stores, events, they're going to look really cool.

What does your dad distill?
Ben: He distills maple sap in Wisconsin, but he's sort of distilled everything under the sun. He's made all types of whiskeys and rums, but his focus now is maple sap. He's never done gin, that's always been my thing. He's not much of an herbal spirits guy. He's always gone from raw ingredients…

Holly: He likes technique, really perfecting one thing well before moving on to another. It's been helpful to have him on speed dial.

Did he do that when you were growing up? Did he teach you?
Ben: Yeah, I always knew what was going on, with the distilling, but he did more of the formal teaching thing when I was around 25, 26... in Florida.

Where did you grow up?
Holly: I grew up in Walla Walla, sort of between Walla Walla and Waitsburg. I drank a lot of wine growing up, and I knew more about making wine and marketing and branding of family businesses. And then I majored in marketing and journalism. I was running a bar in college, too.

Ben, tell more about your grandpa's distilling game. You said Templeton?
Ben: It was a regional spirit. There was not a Templeton Rye spirit, because it was during Prohibition. Moonshining was a way of preserving the crop, and it was done in the winter months underground in small areas that used to have a stove with a flute to keep your livestocks' water from freezing in the winter. Which was the perfect place to have a still, right, because you had flames, smoke, things that could've been a trigger just assumed to be farming. So, it was the regional spirit kind of like cognac. It was like a bunch of people doing it, not a distillery or anything, because you couldn't really do that. There were a couple big distilleries open during that time, to make like "medicinal whiskey."

That's the best kind of whiskey.
Ben: Oh yeah, I don't care if it's craft or anything. (laughs) 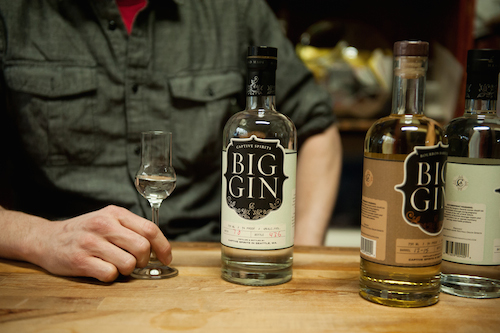 What other things do you want to make? Would you deviate from gin?
Ben: There are a couple more Big Gins we want to offer. Northwest berry, for one… think Sloe Gin, but not Sloe berries, not sickly sweet. There are a million different ways you can add sweetness to a cocktail.

What's next for cocktails?
Ben: There's so much cool and new stuff happening in the spirits world right now. They're smoking the barrel, and smoking the malt, and smoking the white spirit. Spirits are on their way. I think this is going to be the heyday for spirits. Technology and science, and new ways of thinking.

Holly: There will always be the simplicity of certain spirits, but I think the experimental stages that spirits are in are really interesting. It'll pass, like any phase.

Ben: That's not what I think. I think there are new ways of making things, and understanding, new technology. And it'll just make everything better.

Holly: Let me clarify. I think the new, interesting ones will rise to the top, and the other experiments will just sort of, disappear.

Ben: But that's what's important, that people are experimenting. And they haven't been for a long time. Woodford Reserve has been a Bourbon distillery in Kentucky for years, and they just released an All Malt Whiskey, which is how the Scots produce Whiskey, from single grain, two-row malted barley, and then they're aging it in the Bourbon barrels, like the Scots do. And then they're also aging it in new barrels, so it's a whole new thing. And it's really, really neat. I haven't tried it yet, but it's like $110 a bottle. 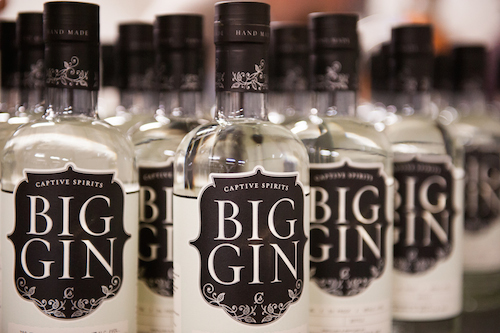 So, where do the new spirits fit in? In classic cocktails? New classics?
Holly: Classic could be a wise way to do it. To ask, "make me a French 75 with this super interesting gin." And you'd still have your bubbles, and your lemon, and your spirit. It's a little more approachable. But once you make your general classics or a little soda, or something.

Ben: What I meant with technology is you have a whole new generation of people making booze now. There are like 500 craft distilleries in the states. And a lot of these people are really smart, with, like, science degrees, or botanists, or all sorts of people involved in an industry that has been centralized in Kentucky, a little in California, and also Europe.

Ben: Ugh, that fucking show. The point is that they're not moonshining. They're not making moonshine on the show Moonshiners. You don't just have a cop that you're following through the woods with a video camera to bust moonshiners. They'll fucking shoot you. And you'd never have a group of moonshiners who were like "Oh yea, come check out our digs! You can videotape it! On A&E? Perfect! Yeah, let's show you how we do it!" It's like a comedy.

But you know the best Limoncello I've ever had was made in Seattle, same with Nocino. So the spirits that were oftentimes thought of as old world, that if it's not from Italy, it's not legit, that's not true anymore. Some of the Grappas we've had in Seattle, people are making stuff in the old world style, old world technique. But when you can further advance, to make it taste better, that's what should matter.

What do you drink, either with Big Gin, or just in general?
Ben: I drink beer, whiskey… With Big Gin, just neat. I'm not really into cocktails.

Holly: I drink a lot of wine. And more refreshing gin cocktails. A lot of Negronis around the house, but I go a little light on the sweet vermouth.

What kinds of drinks should people be making with the Bourbon Barreled Big Gin?
Ben: It's 94 proof. It's not shy but it's more warm than anything, when you breathe out. My favorite Big Gin Bourbon Barreled cocktail is, uh, I love drinking it out of a really nice white wine glass. Three ounces of Bourbon Barreled gin in a big wine glass, you roll it around, and it's done. It looks like Chardonnay.

Where do you like to eat and drink in this town?
Ben: We love Roux. So good. And Rock Creek. How do you order off that menu? I've never had a harder time ordering, because there are like 16 things I want, all fresh seafood.

Holly: That whole corridor, yeah. I love The Whale Wins. It's one of my favorite places to have a cocktail. Renee Erickson did an Outstanding in the Field dinner a bit back, and Big Gin was the featured spirit. She also mentioned that there's a little bit about [Big Gin] in her cookbook, so that was thrilling. Bastille, Stoneburner, Lola, Seatown, La Isla... 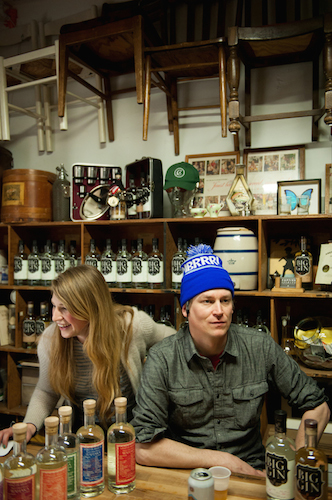