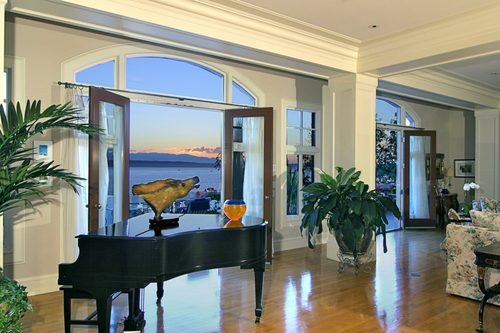 MAGNOLIA—Ryan Lewis, a.k.a. The other guy making all those Grammy Award-winning hits with Macklemore, is the proud new owner of a 4-BR, 3.75-bath Magnolia home, which he purchased in January for $3.3M. The 1995-built, palatial home spans 7,610 square feet and sits on just under one acre of land.

DOWNTOWN—Moving east-west along Union Street, an urban gondola could connect passengers between the Washington State Convention and Trade Center to Pike Place Market and the Seattle waterfront. At least, that's the plan according to The Griffith family, who formally introduced their plan to reporters Tuesday.

SEWARD PARK—As if it were plucked right out of the Palm Springs desert and dropped off just south of Seward Park, this 3-BR/2.75-bath Mid-Century home is ready to host your next sunny shindig, whenever that opportunity might arise, for the cool sum of $1.2M. Question, though: How the hell do you manage to keep palm trees alive up here?