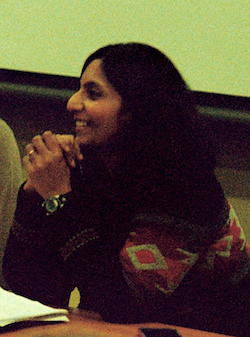 Seattle's new socialist city councilwoman Kshama Sawant spends a lot of time talking about fast food — in the political sense. Her main platform is raising Seattle's minimum wage to $15. But you won't find this health nut nibbling on any McJunkFood. "It's possible to make healthy food that tastes really great. I take it on like a challenge. Can I cook mostly vegan, low fat, organic food that tastes like a bomb? That's not easy to do," she says.

You moved to the United States from India when you were 22 years old. Are there any foods you miss from home?
Oh my God, don't even get me started on the foods I miss from India! More than anything else I miss the street food in India and, to be honest with you, I miss my mom's cooking. My family is from Bangalore so masala dosas are a traditional food for us. Those recipes have been handed down from generation to generation. Both my mom and my grandmom, they were both dynamite cooks. So Sunday brunch was masala dosas with two different chutneys, a tomato chutney and a coriander chutney, potato and onion, totally loaded. You have this brunch and then you're in a food coma for the rest of the day.

You are a super hard worker. What do you eat when you're stressed out and tired and need some comfort food?
Really good fresh bread, like a ciabatta, with butter on it. That would be the most awesome comfort food. I like Macrina bakery a lot. They have this oatmeal buttermilk bread that is just out of this world. Also, the ultimate comfort food in India, if you're stressed and short on time: just cook white rice, none of this brown rice business, and this is not vegan, add a lot of yogurt and milk, you can do this with nonfat, and put salt and pepper and just a sprinkle of olive oil. You don't have to make it rich. It's so good.

What is a dish you would make to impress people?
One dish I've made recently, several times, which my partner and several others have said, 'Wow, I can't believe this is vegan and healthy," is fettuccine and cream sauce. It's vegan, so there's no actual cream in it, it's made from cashew nuts. The original recipe calls for a big handful of cashews, which sort of defeats the purpose because that's very high in fat and calories. I made it with half the amount. You roast an entire bulb of garlic in the oven and you [combine] all the roasted garlic, salt, pepper, cashew nuts, fettuccine. It's unbelievable.
[Photo: Dennis Bratland]
· All Open Wide Coverage [-ESEA-]