Look Inside The Yard, Serving an Ever-Rotating List of Familiar and Esoteric Beers

Share All sharing options for: Look Inside The Yard, Serving an Ever-Rotating List of Familiar and Esoteric Beers

Welcome to Pints of Interest, a new column from Jake Uitti that talks to bartenders pouring some of the best beer in Seattle. 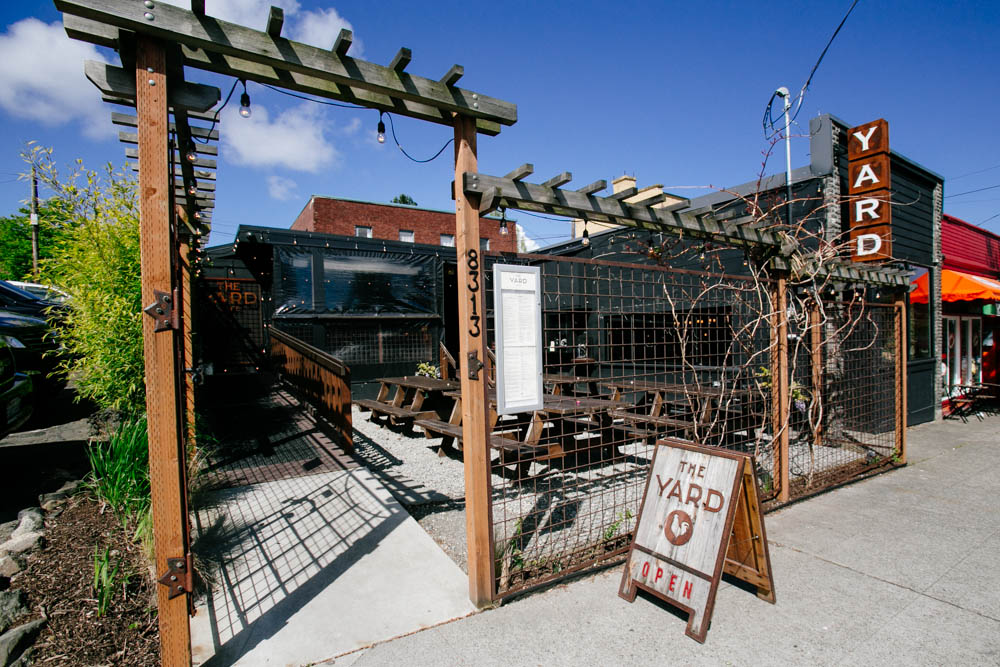 [Photos: S. Pratt]
Its dark hardwood tables and elegant wooden bar make The Yard Cafe a gem of the Greenwood neighborhood. With 18 taps (and a precise menu that lists which beers will be replacing the current taps), there is about as much of a selection as you can wrap your head around. Its outdoor patio and heated porch make The Yard as inviting and warm as any bar in Seattle. At noon on a Tuesday afternoon, Ella Fitzgerald was playing over the speakers and soccer was (muted) on the television. The bartender Kate, who'd just opened the place for business less than an hour before, was there to welcome the Yard's first customers of the day.

Ask Kate and she might recommend the Orlison Pilsner 37—a clean, light beer with a touch of hops on the front end and a brief note of sweetness on the backend. It was $5.50 for the pint and high on the alcohol for a Pils, clocking in at 6.4% abv (next up for this tap: Elysian Zephyrus). Much of the beer at The Yard is from the Pacific Northwest, with a few taps from Colorado and Utah intermixed.

Eater asked Kate a few questions about The Yard and its vast beer selection.

What is your favorite beer on tap?
The pilsner—it's super crisp and refreshing. We always have at least one pilsner on tap. My super-duper favorite is the La Folie sour, it's one of the best sours around—it's perfectly balanced, with a lot of depth and a lot of flavor.

I noticed you have two sours on draft, why is that?
We have a lot of esoteric beers, or rare finds. Jamie Butler, the owner here, does a great job of finding fantastic, obscure and interesting quaffable beers. We usually have at least one sour and we run the gamut of stouts, IPA's, pilsners, ciders. Right now we have a wit beer on, too—we change it up. We go through kegs very quickly, that's why we print menus every day. We also focus on what's next up for our taps.

We have so many regulars that follow us on the web site, they say, "Oh this is next up? Cool!" and they plan around our online menu. People will call in and say, "Hey did you change such-and-such keg over yet?" And people sit and drink a beer just to get to the next one. They ask me to shake the keg to see how close we are to the next beer.

What are some of your best beer sellers?
We go through quite a few IPAs. A lot of the more obscure beers go fast, too. Green Flash Brewing does very well here, especially their IPA. PFriem is another great brewery that sells out fast whenever we put their beers on. Our clientele is incredibly knowledgeable of beer, they know their breweries, that's why they'll check online. The Bale Breaker [Pale Ale] is selling quite well right now, too.