Share All sharing options for: Lark's John Sundstrom on His Cookbook Collection and the Titles He Keeps Coming Back To

Welcome to Book Club, a monthly column in which Eater contributor Sonja Groset talks to all manner of food professionals about their book collections. 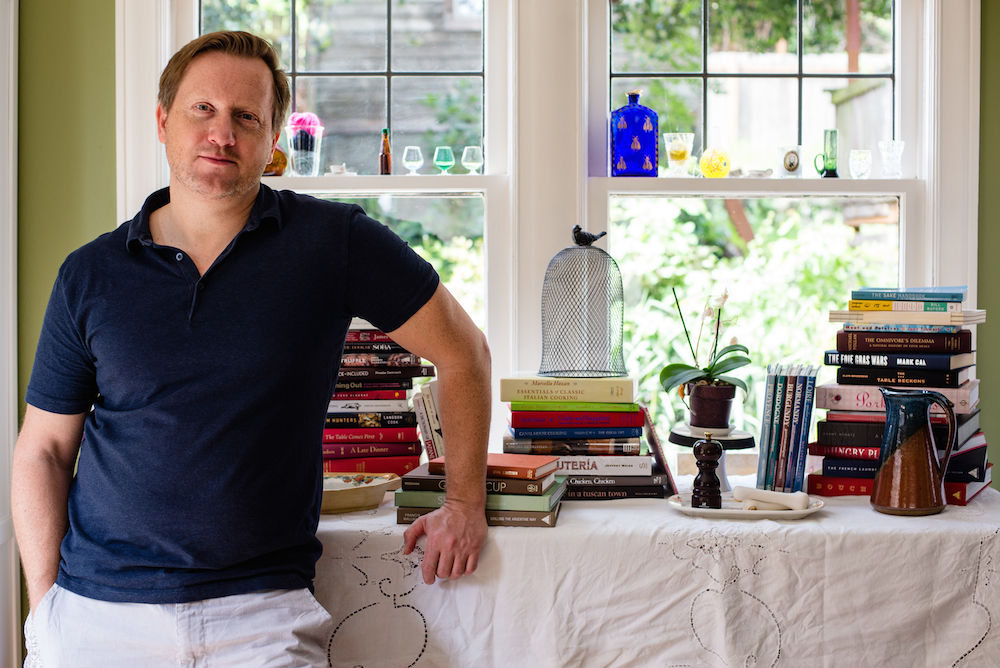 John Sundstrom opened Seattle's Lark restaurant ten years ago. In 2013, the James Beard Award-winning chef self-published his first cookbook, which won an IACP prize in 2014. Later this year, he'll open his second restaurant, a bar, and sandwich shop just a few minutes away from Lark. Eater visited Sundstrom at his home to chat cookbooks, cooking inspiration, and his future projects.

Your cookbook shelf extends from your home to the restaurant, tell us about your cookbook collection.
The books I keep at home are the more special books, the newer books. I have quite a few things from the last year or two, and those tend to stay at home. The books I have at Lark tend to be the ones I have from culinary school, more professional books. There's a book with everything you want to know about sausage, for example. Books that go very in depth into a topic.

What were some of the first books you bought, or some of the older ones in your collection?
Some of these go back about 25 years when I was in culinary school. The first book I bought was Jacques Pepin's La Technique. That's kind of where my culinary career started. I thought, 'Well, I'm into cooking and want to learn more.' My grandmother was a great home baker, she made candy and amazing desserts. I flipped through her cookbooks a lot. The first book I probably cooked from was her copy of Amy Vanderbilt's Complete Cookbook. We made fancy pastries together. So, I kind of gradually started picking up cookbooks from there. You know, as a young cook you don't have much money to spend, I had my school books and would pick things up here and there.

What are some books you've bought or acquired recently and why?
A lot of these books are ones I've picked up in the last 15 years or so. Ones that are more meaningful. I have the Noma book and Mugaritz. Smoke & Pickles by Edward Lee is great. He's a Louisiana chef that I met a few years ago at an event. We hung out for a couple days together, drank bourbon and cooked. So I was happy when his book came out, and think it really captured his personality. 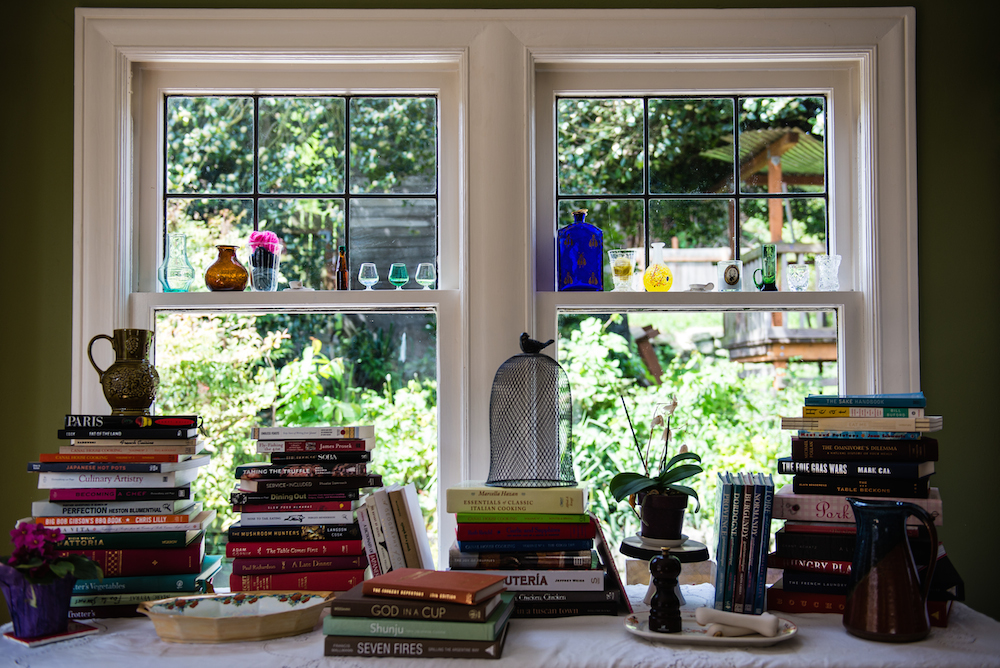 How about some of the international cuisine books you have—is there a particular cuisine you're drawn to?
You can see there is a big Japanese influence. My first job was in a Japanese restaurant, so early on I bought a bunch of books on everything from homestyle Japanese cooking and sushi to Japanese hot pot. We went to Japan a few years back, so I wanted to learn more and got books on soba and sake too.

There is definitely a strong French and European presence in my collection—definitely French and Italian, and Spanish—which is newer for me, but I love it. This series on French regional cooking published by Abbeville Press (e.g. Provence Gastronomique, etc.) from the mid-90's were so inspirational for so many years. They really helped me learn about the food and the regions before I had the chance to travel there. I really wanted to learn the authentic way to do things. In some ways, this was my European excursion before I ever went there. I could really learn about what they do in the Calvados region, Burgundy, or wherever. A lot of these books I think really influenced the style of Lark.

You published the Lark cookbook as both a print title and digital book. What are some pros and cons of digital cookbooks, and why did you decide to go that route?
I love ebooks, I have Elements of Taste on my device. I think it's out of print, but I could get it digitally. Gray Kunz is a very excellent chef, very precise. In the intro he really goes into balancing and contrasting flavors and spices. I'd say he was one of the first to bring Asian flavors into the US in an elegant way. I kind of bought it more for his writing about flavor and how to develop it, versus the actual recipes.

I think that printed cookbooks will always remain and be strong. In many ways they are the new art book. Even if you aren't a person that collects art books, you may collect a few cookbooks. Cooking is more universally acceptable. The only downside with digital is that they can take up a lot of space on a device. But, as tablets get smaller while increasing in memory space, that won't really be an issue. It was an easy decision for us with the Lark cookbook. Because we self published, we could work on both versions of the book simultaneously.

How about photography in a cookbook? Lark has gorgeous photographs.
Yeah, with the digital book, we were able to add a lot more photos. Zack Bent, the photographer, did a great job. The print book had room for about three photographs on average per recipe. Some may have eight or ten. The digital book could hold a lot more though, maybe ten to 12 photos—one for each step of a recipe.

Printing is more expensive of course, so that is part of the motivation for editing down the pages. Some photographs are just of the finished dish, or elements of the dish. There's a spot prawn recipe and there is just a picture of the whole spot prawns, live and on a plate. To me that is perfect. You don't even need to see what the dish becomes because it's all about the prawns. 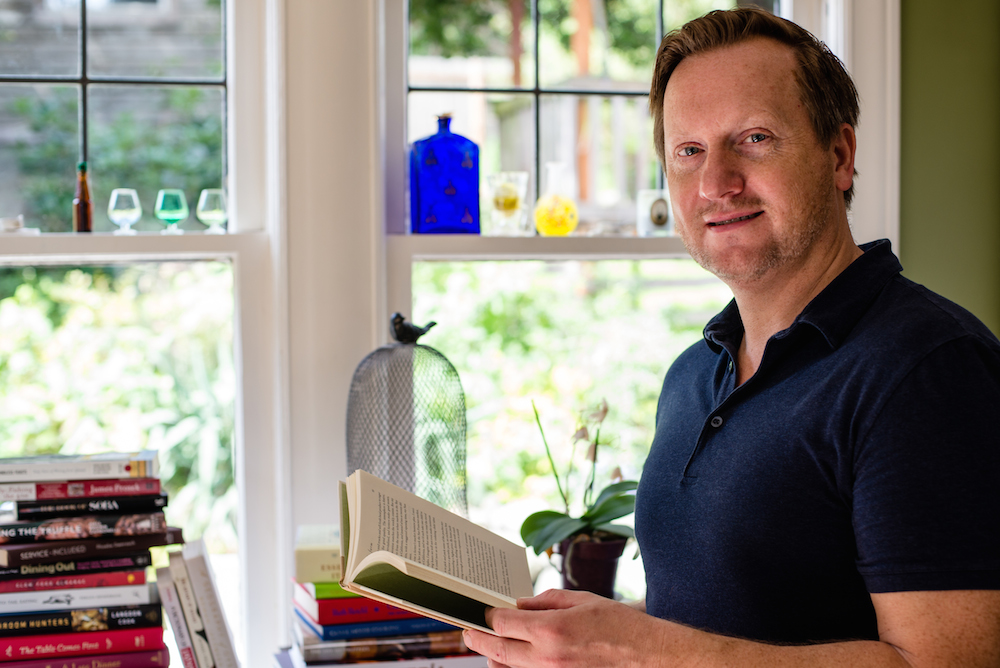 What are some of your favorite cookbooks?
One of my favorites is the Shunju book—it's about 12 years old. It's a restaurant in Tokyo—maybe there are two now. There are really great stories in there. It's one of the books I showed my book helpers when we were working on the Lark cookbook. They get really into the land, the seasons, and there's this big bamboo feast they do out in the forest. It's a great book in terms of being very natural and being very much of it's place. It's one I find very inspirational and come back to often.

The Japanese esthetic is just very balanced, and very focused. It might just be three or four ingredients that are in perfect harmony, versus too many ingredients and too complicated. That's very much my style—let's cut some stuff away, maybe just have two ingredients instead of 30.

Some other favorites include Tom Douglas' first cookbook. I worked for him for six years at Dahlia Lounge. We just got his Dahlia Bakery Cookbook last year. We have a connection to all those folks involved in Tom's books. I know how to make that pear tart and that coconut cream pie, but we still our own copy of that cookbook. And the peanut butter cookies are awesome! The first David Tanis book, A Platter of Figs, he gifted to us. We did a dinner together when he visited town a few years back.

The restaurant is very close to Elliott Bay Books on Capitol Hill. I'll go over there and troll the cookbook table. It's a very rich environment out there for cookbooks right now. I bought this book Thrive recently. It's written by a guy in Vancouver who was a cycling trainer. So this book is all about nutritious, healthy food for training. A lot look quite tasty and pretty easy and less 'granola.' We have a 10-year old son, so we try to think about how to feed him healthy and introduce some new things, so this book had some great stuff in it.

You have a lot of essay books about food and life in the kitchen, like Heat, Omnivore's Dilemma, some Ruth Reichl titles, in addition to cookbooks. What do you like about those books?
I love to read. My wife JM is really into literature—that's something we share a passion for. She's a great cook too, and cooks most of the time at home. So reading something like the Reichl books, or Michael Pollan, gives you more of that story behind some of the food we cook and eat, not just how to make it. I truly love food writing, and these books also provide inspiration, and keep us motivated, excited and expand our knowledge.

I often talk to my staff and my cooks about that—you know, feeding your internal fire. It's a hard job, we all get tired, you get burned out. OK, if you feel like you're in a slump, or stumped for how to use all these ingredients coming in for spring, that's when you need to sit down for half a day and pull down all your books, and magazines and do something to energize yourself. I'd say I do that every couple of months, I'll just try to take a few hours and grab a couple of books and think of, 'summer is around the corner, we're going to see this new season happen, and it's time to plan menus,' so I'll pull books out to get ideas.

Would you ever consider writing a book like that?
Oh yeah, I'd consider that. There are a couple things in the Lark cookbook about my history and path as a cook, and the road to Lark. Those were fun to write, but I feel like anything more than that needs to come later, with more experience and more stories to tell.

Some of these books are very personal. Like The Mushroom Hunters, Langdon Cook is a really great guy and we've become friends. We've done some walks together, and mushroom hunts, and we see each other around town at events. I've always had a strong affinity for wild ingredients, especially since I moved to the Pacific Northwest about 25 years ago. Getting to know someone like Langdon or Jeremy Faber (Foraged & Found) —people who are into the hunting and foraging scene. Langdon gave me his book. We swapped books at the last Tom Douglas cookbook event. That's a great read. I mean, Langdon is a writer first. For me to do something like that would be very daunting, but it's impressive and a fun read.
—Sonja Groset

Editor markup for Sundstrom Cookbook. This is only visible in the story editor.