Welcome to Up-and-Comers, a monthly column from Megan Hill dedicated to the rising stars of Seattle's food and drink scene. 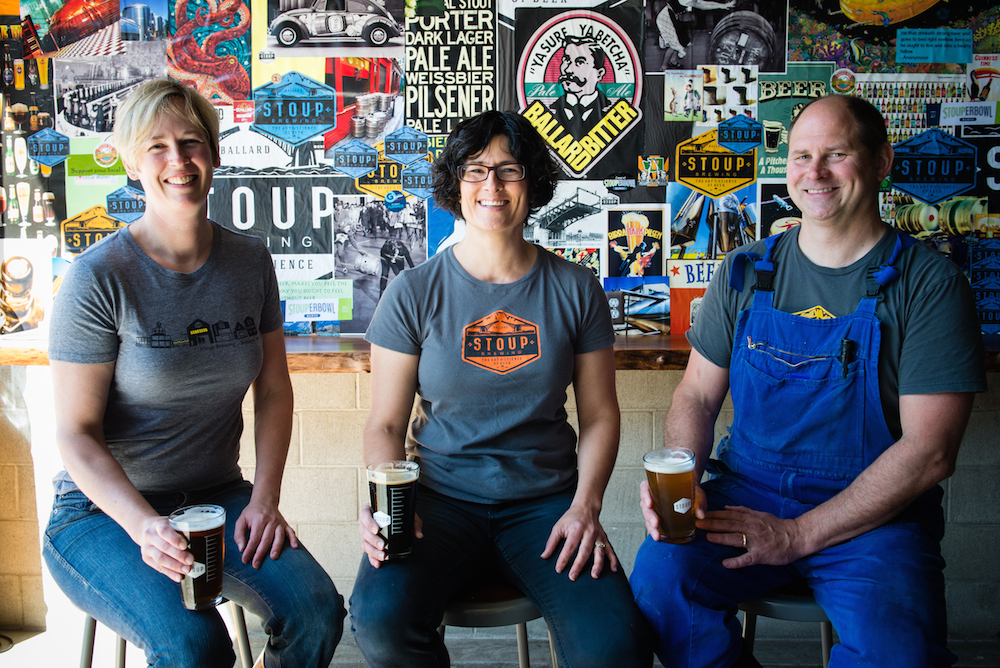 When husband-and-wife duo Brad Benson and Lara Zahaba opened Stoup Brewing in Ballard last fall, they were pursuing a mutual love of beer they shared ever since they started dating. They partnered with Robyn Schumacher, Washington State's first female Cicerone, and opened their 15-barrel brewery in October.

Already, Stoup Brewing has become one of Seattle's top microbreweries and is on tap at pubs and restaurants around the city—including Delancey, Marination Station and Ma Kai, Pine Box, and Serious Pie. Stoup's biggest accomplishment to date came in March, when their Porter took home the silver medal in the Robust Porter category at the 2014 World Beer Cup®.

How did Stoup Brewing get started?
Brad: What's the official story? I've been home brewing for over 20 years and brewed professionally for about six years on the East coast. I drug Lara back here to the West Coast and I went back to my job as an environmental consultant. I had a sort of mid-life crisis and instead of buying a sports car I bought a brewery.

Lara: Two years ago we said "What are we doing?" Brad was not happy going to work every day. And that's when the craft beer movement here in Seattle sort of was coming around again. We were starting to hear of all these new breweries opening and we asked ourselves, "Why aren't we a part of that?"

Brad: Robin was instrumental, too. Robin's a mutual friend of ours and she started shooting emails that said, "Hey I'm thinking about opening up a microbrewery." And we started talking back and forth and it kind of inspired the bug in us. 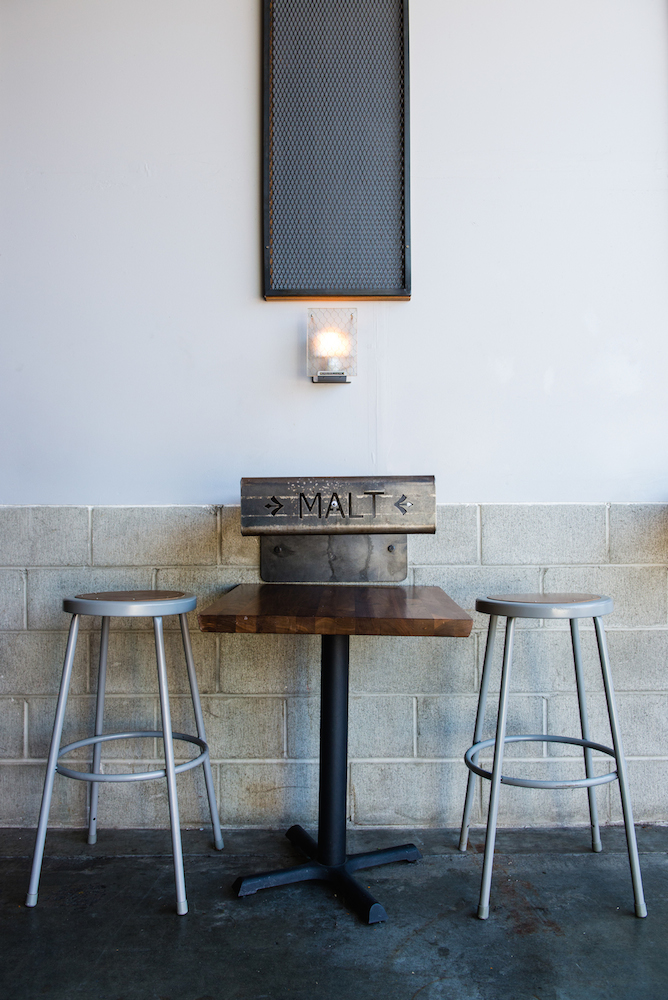 Has the Porter become your best seller?
Lara: We've been seeing the porters disappear. We've both always loved porter and they're just harder and harder to find, especially in bottles. We live a block away from Chuck's Hop Shop in Greenwood so during the whole process we were running over there and wanted to try porters they were just harder and harder to find. So it was like alright, we're making porter no matter what. Logic would dictate that because they're disappearing that would mean they're not selling through. But it's a great alternative to all the hops.

How long did it take you to find this space?
Lara: It didn't take us very long. It's one of the first places that Brad saw just driving around this area. Our financing was a small business administration loan, and that's what took a long time to come through. That was the really stressful part. There was a period of time in which the landlords of this space were starting to wonder if we were really serious and we were starting to fear that we might lose the space if they got tired of waiting for the funds to come through. We couldn't sign the lease without the funding and that took several months longer than we really anticipated. And as soon as Brad had confirmation on the loan he like walked back into his office and submitted his resignation.

Brad: It was a good day. I had it on my computer and every Monday I'd come in and change the date and I did that for months. When we finally got the phone call, I ran back into the lab. It was a Friday night, Friday at 4:45, something like that. And I quit!

Why Ballard? It seems like such a crowded field of breweries.
Brad: We like the neighborhood because first off, we live here. We didn't want to open a brewery and make a long commute to West Seattle or Georgetown, those other burgeoning areas. The other thing is that there's an industrial corridor here in Ballard. Go downtown, for example, there's no good industrial space, it's very expensive. Same thing with Capitol Hill, places like that. We've got a good industrial corridor where we can build something like this. I think Ballard's becoming a destination. We get calls from people from like Wisconsin asking about hotels in Ballard, people who are flying in and staying in Ballard just going to breweries.

Lara: One thing I would also say about the reason it's working with so many breweries is that there's a lot of variety in size, you have the bigger breweries like Hale's Ales and Maritime Pacific Brewing Company which anchor Ballard and they have been here the longest and they have the largest production by far, and we're right in the mid-range with a 15-barrel brewery. And you have smaller breweries like Populuxe Brewing. There's room for all of that diversity in size and how people are approaching that market. And then of course in the styles of beer that everyone is producing.

Fifteen barrels seems like a lot starting out. You're so new that seems like something most breweries would grow towards. How were you able to get this right off the bat?
Brad: I worked professionally in brewing before this so I really started crunching the numbers and a 15-barrel system is a nice sweet spot between making enough beer to keep a tap room open and having our beer available outside the tap room. I wanted to be a production brewery. I like going to nice bars and restaurants and seeing my beer on tap.

Lara: And we didn't want to be faced with the need to both finance and find a space for growth in the first year or two of opening our doors. We didn't want to set ourselves up for that.

The World Beer Cup Award is a huge feather in your cap.
Brad: We were blown away. It was awesome.

Lara: It felt really good. We were really excited. We got the news right at bedtime so we were trying to get our kids down to bed. I will say I've been drinking Brad's beer for a long time now and I know it's good. 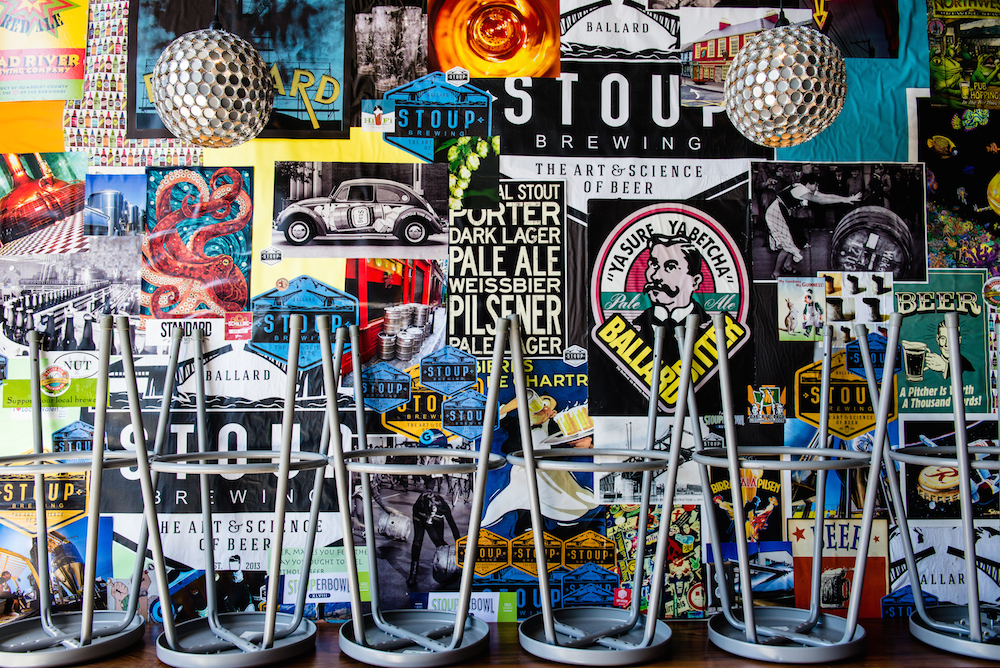 Why make a porter available year-round?
Brad: The porter is one of Lara's favorite styles and that's why we decided to make it year round. I guess this is me but I find a woman drinking a big glass of dark beer very sexy. Lara likes to drink porters and stouts.

Lara: Nightwatch [Dark Amber Ale from Maritime Pacific Brewing] is my favorite. When Brad and I were first dating, I just thought Nightwatch was the coolest beer and there wasn't anything like it. And that was a long time ago.

It's interesting to see you're doing a session IPA—is that a new trend in the industry up here?
Brad: There's always this arms race of hops and alcohol, hops and alcohol. And you have all these beers that are like 9 percent alcohol. For me the enjoyment of a pint of beer, I find rewarding, gratifying, and I want to be able to enjoy the second one. There's a place for those big beers but it's nice to have something that's lower alcohol.

Lara: You do hear more and more of people who think the IPAs have gotten too big, too heavy, and the India Session Ale is definitely a response to that.

In your opinion, what was it about the porter that won the medal? What makes it stand out?
Brad: The specialty, roasted malts that are in it. There are probably eight or nine different ones. A lot of times with a porter you'll get your chocolate malt for the color and some of that chocolate and coffee flavors but we've gone and done that and added some crystal and caramel malts and some roasted rye and wheat as well to just add another layer of complexity to the beer.

Lara: I think it's important as a consumer, or the way I would approach a beer, not knowing all the particularities that are going into it on the production side, it's the mid-palate. The beer is full and round in your mouth for the whole cycle of your sip. The flavors don't fall off and go away. And I think that's something that might be a little harder to achieve or leads to greater satisfaction.

Brad: That's how we always approach the beer. There's a beginning, middle and end to the beer and when one of them is lacking, you notice. If it falls out in the middle or finishes harsh at the end, the malt drops out at the end, that kind of thing.

What's going on with the construction next door?
Brad: Our beer garden is under development. It just looks like a prison yard right now but we're working on getting all the approvals from the city and we'll have a beer garden with pretty significant outdoor space. It will be fairly self-sufficient. I would say that our tentative goal right now is Fourth of July weekend.

What are your favorite breweries, besides your own, of course?
Lara: I have always loved Elysian. More of their traditional, their original line. I've always lived the their Immortal IPA, It's my go-to IPA and it never lets me down. And their Valhalla Red.