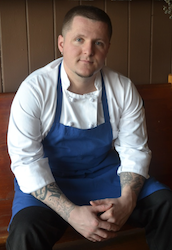 Should charging dying cell phones be expected, banned, or offered for a fee in restaurant and bars? Eater's 2013 Chef of the Year Brendan McGill (Altstadt, Hitchcock, Hitchcock Deli) posed the question on Facebook over the weekend:

People waving their dead iPhones at bartenders is becoming epidemic. A service you might provide to a friend or regular has become an expectation - busy service staff who already have plenty to worry about are also expected to juggle a full bar's dead phones. Folks seem to be taking less responsibility for their personal devices and their respective batteries.

Should we pull a David Meinert and make some groundbreaking policy, say, a $5 menu charge for using our well-stocked electrical charging station? Or do a Canlis and bring guests a charging pack on a platter, with only one to hand out at a time? Alternately, simply decline to charge people's phones.

The strive to provide excellent service raises the conundrum: if your server is messing around with your phone, they're not attending to your more dining-related needs, nor those in the rest of their section. The classiest joints seem to be aiming to take the tech out of dining: no photos, no cell phone talking in the dining room.

So, what do we think?

A long comment thread follows (Meinert points out that his Lost Lake Cafe was built with plugs at each table) and it's fairly split between diners that are for and against charging to charge phones. The comments continue in Rebekah Denn's post about the cell quandary over at The Seattle Times. McGill tells Denn that he's considering installing outlets under the bar and may keep an externally charging battery on hand for customer use.
· Should you ask a bartender to charge your phone? [ST]
· All Brendan McGill Coverage [-ESEA-]