Share All sharing options for: The Chai Place's Family Recipes Fuel a Dream

Welcome to Up-and-Comers, a monthly column from Megan Hill dedicated to the rising stars of Seattle's food and drink scene. 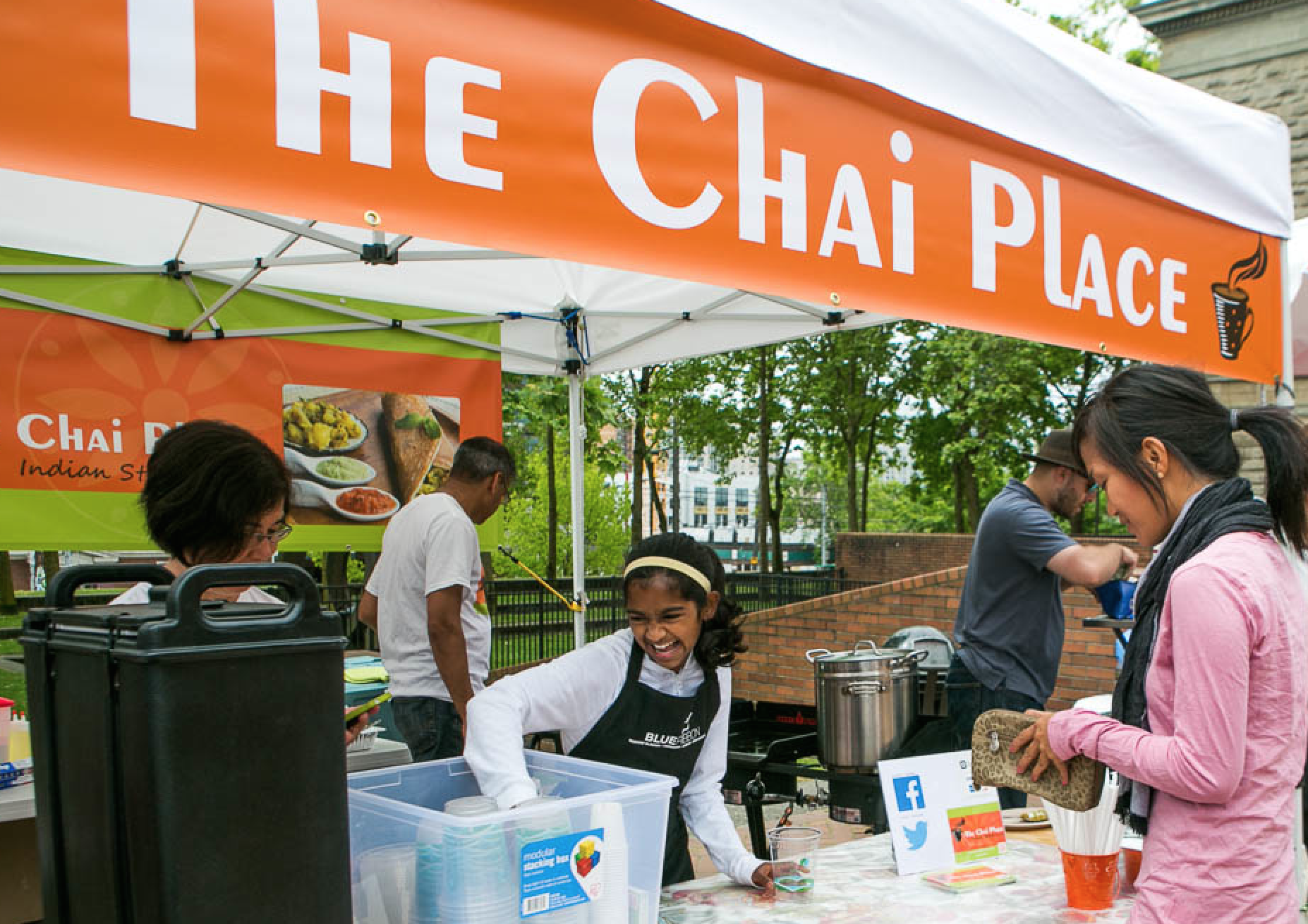 Sanjay Kawad admits there was a time when he was "the worst cook." Originally from a small town in the state of Maharashtra, India, Kawad started cooking with friends after he moved to the United States. Kawad befriended skilled home cooks who helped him experiment with various cooking methods and cuisines and began taking cooking classes. When Kawad and his wife Cheryl moved to Seattle, they saw an opportunity to start a business.

Kawad strives to source as locally as possible for his stand's flagship dish, masala dosa, a pancake of rice, lentils, and fenugreek seeds that are soaked in water, ground, and fermented overnight. Kawad fills his dosas with potato curry topped with tomato and coconut chutneys. Though he's just starting out, Kawad has big plans for his newfound skills. 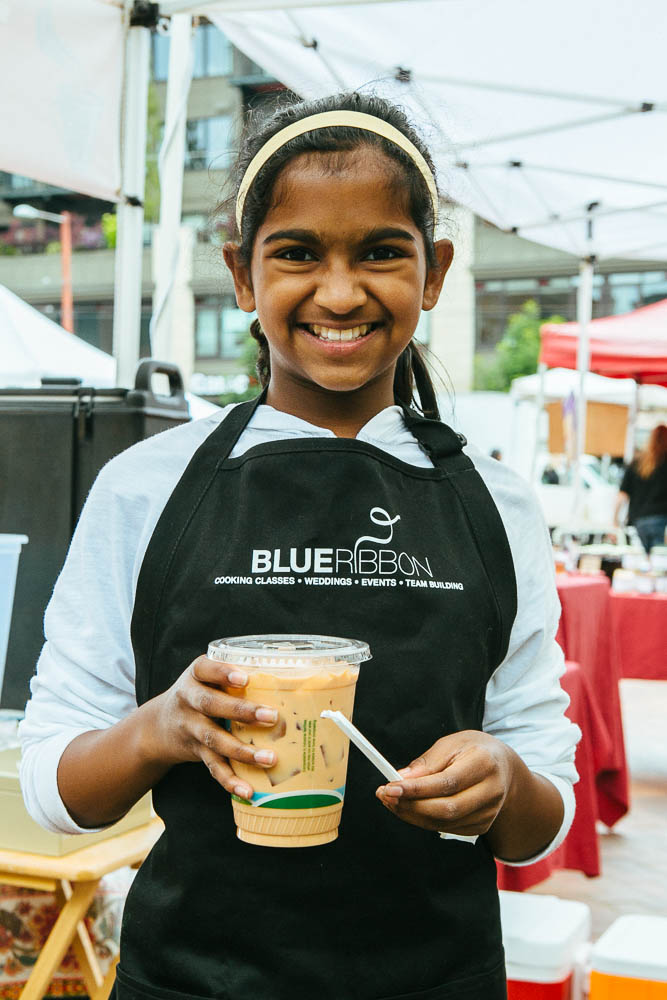 You must be burning the midnight oil to run the market stand, with a full-time job taking up your weekdays.
It is a lot. One thing that I've helped is that I've improved a bit of the process, how I do things, how I cook. I've been looking at making it more and more efficient so it's not as stressful compared to the first market where I was completely stressed. My wife and my daughter, everybody was stressed out. But the customers were so nice, so patient.

Sounds like the enterprise is a family affair.
Yes, my wife and daughter come and help me at the market. My daughter is 12 so she loves to help and she's pretty excited about this.

So the reception has been positive?
Yes, actually, I was surprised. One thing that surprised me was how many people in Capitol Hill know what masala dosa is, which is a little odd because every time I go to a restaurant, most people never order masala dosa. I'm talking about the non-Indian folks. They always order the usual, the chicken curry or the butter chicken. So it surprised me when people started coming to me and saying "Hey, you know, I'm so glad you're here, we love masala dosa and we needed a place on the Seattle side, and now you're here." I said, "Wow, that's a good sign!"

Maybe you're dealing with a more educated customer base?
I think so. I think it's because Capitol Hill, people are pretty connected, people are willing to try all kinds of different foods. That was very exciting about Capitol Hill, because the clientele is just amazing. They're very well traveled, they're foodies, so they know what good food is. And thankfully they like my food.

Can you tell me more about the food you're making?
I'm trying to focus more on Indian street food, but at the same time I'm also hoping to expose customers to non-street food dishes as well. So basically Indian street food started in Bombay about 40 or 50 years ago with the millworkers that didn't have any place to go and eat cheap food. All these small trailers started l trailers started to come and make food right on the spot. It was lip-smacking good, that's why they call it chaat. Chaat means lick, literally, like lick your fingers. So my goal is to introduce many of those dishes that you don't find necessarily in Indian restaurants outside of India. I started with masala dosa because people are sort of familiar with it but I'm working on a few other dishes. I can't tell you what exactly they are yet because I'm still experimenting. But people at the market have said "Don't worry, we'll taste it for you." So they're really looking forward to my new dishes.

And your chai?
The chai I make is not from syrup, it's made with organic spices. I make it the previous night if it's cold chai and if it's hot chai I make it the same day in the morning. And it's freshly brewed. I use organic assam tea and I use locally-sourced milk from Fresh Breeze Organics. I'm really proud of my chai. I've done a lot of experimentation and I think it's way better than the ones they make in coffee shops which come from syrup. That doesn't even taste like chai to me as an Indian. One of my goals with this is to introduce people to really authentic and good chai.

Your chai is a family recipe, right?
I talked to my mom and my aunts and I experimented with the proportions and after like maybe 10 or 20 tries I came up with a recipe that is really tasty. I had done a lot of taste testing before the market with like 50 or 60 people, different groups, and they're not even my friends because I wanted completely honest opinions. And they loved the chai. They said, if you had this seven days a week they'd stop going to coffee shops for chai. I was like, "Whoa that's a big compliment."

Are you using other family recipes too?
Yes. My aunt is a really good cook, and my mom as well. So I've been talking with them a lot. But of course since they are home cooks, they don't use any proportions. They said, "Oh, put this, put that."

And I was like, "Ok, what are the proportions?" And they said to just guess. So it's taking me some time. But they tell me the basics and then I start experimenting. Usually I come up with a nice taste that I really like, then I serve it to my friends, and then I introduce it to the market.

I know you're just getting started but what are your eventual goals with the business?
I want to grow this. I was thinking about doing a chai delivery because I feel like there are a lot of options with that. That would be my first way to expand the business. I was thinking of getting a trailer too, if this whole thing succeeds this year, and if the trailer succeeds I might open a restaurant after that. My parents are very interested in me having my own business. My dad has been talking about me opening my own business for so long that he's happy I'm doing it. He's always said, "You should never work for other people."

Eventually I want to expand quite a bit. My final goal is to be able to have a restaurant that has completely new dishes and change those dishes once a month or every other month if possible. I'm dying to show people the variety of cuisine in India that they wouldn't be exposed to unless they've traveled to India. I don't want people to get stuck ordering the same thing every time. That's no fun! No butter chicken. If you want butter chicken, go to another restaurant.

I'm excited to see where this venture will take me. I want to use locally-sourced food with Indian cuisine. Most Indian street food is vegetarian except for a few dishes, so that's my goal. And you have to try the chai.

Editor markup for Chai Place. This is only visible in the story editor.