Georgetown Brewing's Manny Chao on Making it in the Beer Business

Share All sharing options for: Georgetown Brewing's Manny Chao on Making it in the Beer Business

Welcome back to Pints of Interest, a monthly column from Jake Uitti that features brewers and bartenders pouring some of the best beer in Seattle. 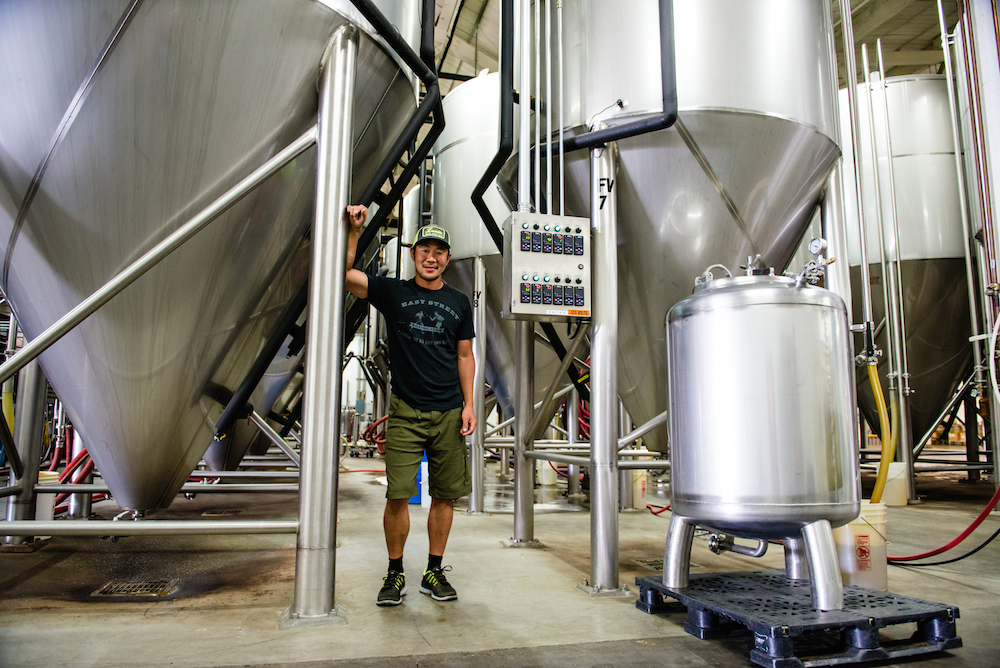 Started by brewmaster Manny Chao 11 years ago, Georgetown Brewing is located in an unassuming industrial building in Seattle's Georgetown neighborhood. Large yellow and black sliding doors open into the tap room stocked with nine beers on tap, from Chopper's Red Ale to Roger's Pilsner to, yes, Manny's Pale Ale. Plus, a wall full of growlers. Samples here are free, but there are no sit-down pint sales.

Behind the taproom stand tall, pristine silver vats that make the brewing room feel much like a Willy Wonka laboratory. Manny recently showed Eater around the space and answered a few questions in the back office (where Tootsie pops and granola bars litter the shelves).

What are your best sellers?
Manny's is number-one still. It represents about 75% of what we do. Lucille has become second at about 15% and Roger's would be third. IPAs are the fastest growing category, but Manny's has had such a jump-start, it was the first one we did. The best-seller in the pub here is anything that has 'IPA' on it. We have an India Pale Lager coming out soon, and a Session, too. And it's the time of year for spring beers, so we're brewing a lot of German-style.

How many places in Seattle sell Georgetown? How many states carry it?
We have something like 3,000 customers total. In King County it might be like 2,000—in the Seattle city limits it's about 500. We're in Oregon and Idaho right now, too. In Oregon, there's about 100 places that carry us. Probably about the same in Idaho. We're heading to San Francisco at the end of the month. We've got a representative that's been working in Tacoma and he's heading south now. It's an investment, the payoff comes with how many kegs we sell. Our hope is within two years we'll hit the number we're looking for.

What makes this brewery so successful?
It's a little bit of everything, working with wholesalers and customers—that's a big part of our business. Also the right marketing and feel of the label, and all that. There's no one secret to success.

The beer must be at least a little different each time it's brewed. How do you balance that?
Yeah, it changes just a bit all the time. We try to contract out for the same hops but even now we have two suppliers. The grain is mostly consistent but it can vary year to year. So we have to constantly make small adjustments. And sometimes, you know, yeast has a mind of its own. Every week we have a quality control meeting. A lot of it is tasting beer, analyzing numbers from lab work. But yeah, you have to just drink the beer. I always tell the guys, it tastes one way here from the vats but you have to get to a bar or restaurant and decide whether you want to have another pint.

Can you talk a little about Bob's Brown Ale?
Bob was a friend of mine that passed away from cancer. I was a volunteer at a camp called Camp Goodtimes on Vashon Island, a place for kids with cancer and their family. When I first met Bob he was 16 or 17 and I was his counselor. He first had leukemia when he was 11, and he relapsed and died when he was 21. He would come to Seattle for treatment—he called me up one day and so we ended up spending a lot of time together, we read the Lance Armstrong book together (which was inspiring at the time), went to movies. Shortly later, he passed away. His brother and I were having a conversation and thought it would be a good idea to name the next beer after him, and so we did. We talked to his mom and asked her to pick a charity. And she picked the Seattle Ronald McDonald House because that's where they would stay. We release Bob's Brown Ale every May 14th. We raised close to $100,000 this year and a lifetime total of about a half-million.

Georgetown's taproom is open from 10 a.m. to 6 p.m. everyday but Sunday, with tours of the brewery on Saturdays.
—Jake Uitti

Editor markup for Brunswick & Hunt. This is only visible in the story editor.