Welcome back to Book Club, a monthly column in which Eater contributor Sonja Groset talks to all manner of food professionals about their cookbook collections. 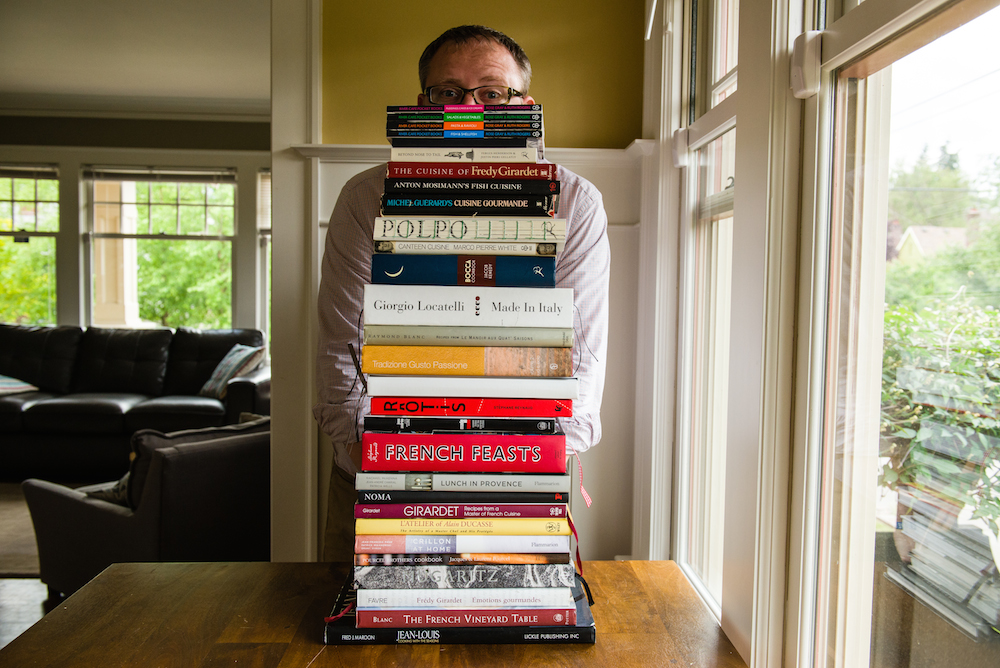 Ethan Stowell has a legendary cookbook collection. The chef and restauranteur owns around 2,000 titles, spread between his restaurants, storage, and home near Green Lake. Stowell just opened his tenth restaurant, Chippy's, and has plans to launch the high-end Noyer later this year. Eater caught up with Stowell to ask about his collection, his favorite cookbooks, and what else he collects.

When did you start collecting cookbooks?
I started as soon as I started cooking in 1995. Every year since, I buy a bunch of the latest titles. Over the years, I've bought a lot from used bookstores too. You know, when you're young and broke, you go to the used bookstore in every city, on every trip. You're in Oregon, you go to Powell's. The great thing about these stores selling used books, is you go one trip and find some great stuff, but then you go a couple months later and find all these gems. Anyways, I figured if I read books, I'd become a better cook, and then it became this kind of obsession.

What are some of the older, or more rare books you have?
There are some rare old books that not many people will even know. Everyone is excited about Ludo Lefebre, Mario Batali, the Volt book, Manresa, and I love those. I have some Frédy Girardet first editions, one of only a few Louis Palladet books, Raymond Blanc books. Oh, look this book (Marco Pierre White's Canteen Cuisine) still has the Amazon invoice in it. Look at this, 1997! Wow, it looks like they were like still typing these out individually. There's that stuff, but then this two volume set of Julia Child's Mastering the Art of French Cooking I found at my neighbors garage sale last weekend. Twenty bucks. I couldn't believe I didn't already have it.

How do these books show the evolution of cooking?
Looking at some of these books, it's fun to see how food has changed over the years. Who does a ham soufflé anymore (flipping through Cuisine Gourmande by Michel Guerard)? Anton Mosimann (Fish Cuisine) - he was known to be a freak for detail. Food was so much more simple, but so much harder. There was such a level of waste back then that there just isn't anymore. That was one of the things these fanatical chefs were known for. They'd do a party for a 100 people and each red wine poached beef tenderloin had to look exactly the same. Back then they'd get like three or four portions out of one tenderloin. Now that makes your stomach turn. But back then people we're like, 'This guy throws stuff away if its not right.' If you tried that now, dinner would cost $3,000 a person. 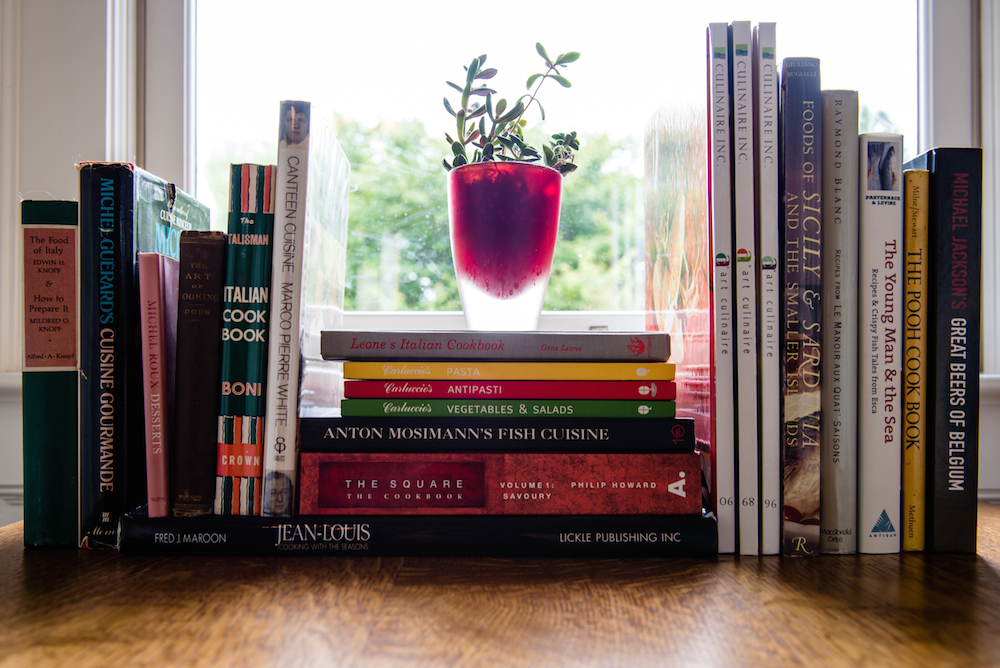 You said you've moved a lot of books into storage and to the private dining space at Staple & Fancy. How did you split up your collection?
Some of it is just about an emotion I have about a book. Like this one - Michael Jackson's beer book Great Beers of Belgium. He came in for dinner once, but has since passed away. Antonio Carluccio, he's one of my favorite authors - I think I have every one of his books. Even these little leaflet ones I want to keep here at the house, so I don't risk losing track of them. Cookbooks haven't been my priority lately, so there are some newer ones I haven't had a chance to get into. So hopefully by keeping them here, I will find time to read them.

Tell me about some of these large format books, they barely fit on the shelves!
Every single one has something to do with something I like. French Laundry, The River Cafe books - all their books are awesome. Georgio Locatelli's books are great (Made in Italy, Made in Sicily.) Bocca is an awesome book, all the Art Culinaire issues. The Culinary Chronicles ones are cool - they're like $150 a book though. The Beautiful Cookbook series is great, I love those.

If there is any book I love the most though it's these two - Culinaria France and Culinaria Italy - every book in the Culinaria series is so informative. It's the series that got me really excited about collecting books. This Culinaria: European Specialties book has been on so many moves I've made. I probably got it in 1996. This thing has been across the country and back it's probably been in 20 different houses and apartments. The River Cafe series is kind of like a modern version of the Culinaria books.

You have a lot of of Frédy Girardet books, tell me about him.
Yeah, look at this photo of Frédy Girardet, Joël Robuchon, and Paul Bocuse. You hear a lot about those other two but not about Frédy, and he was the best one. He was the guy that these two thought was the best cook in the world. The thing about him is he didn't go out and do anything else, he just stayed a cook. He just kept cooking. He wasn't going after expanding and getting a bunch of restaurant deals. He could have had a thousand of them, but was like 'I got my one restaurant (Crissier, in Switzerland), and I'm fine.' 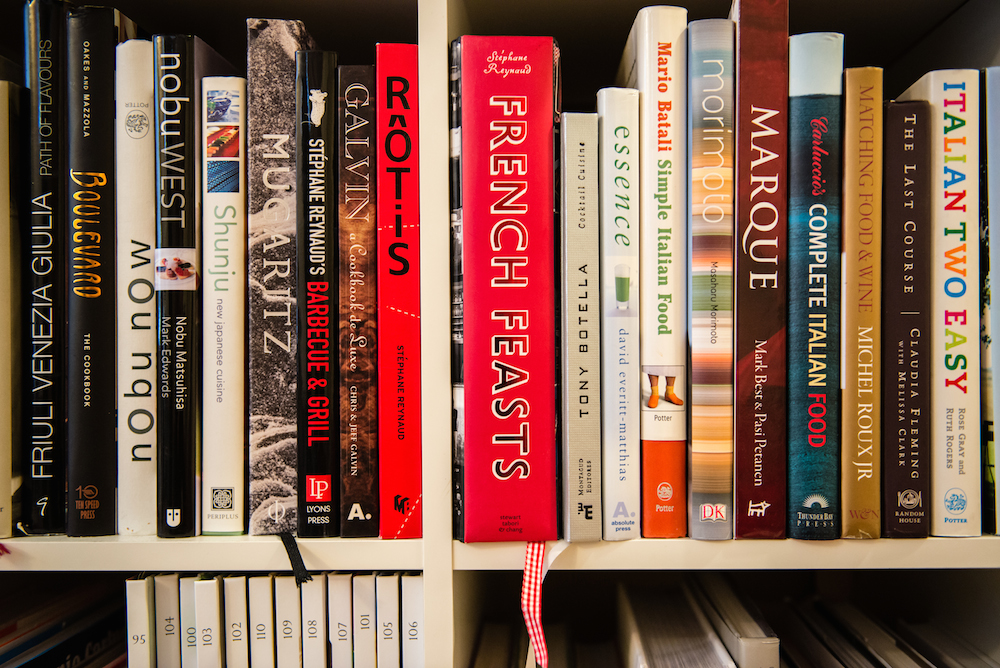 As a professional chef, how do you use cookbooks?
I very rarely cook out of them, but I read them thoroughly. I read the recipes and see how they're doing it. As a chef you want to draw on two things: 1) Your previous experience, which has to be broad; and 2) staying true to cultural representation. If you're going to do a French dish, know where it comes from in France, if you're doing an Italian dish, know its origins in Italy. I have done mostly European food, not a lot of Japanese, African or Middle Eastern, so French, Italian, and the like have been my areas of study. That's what first drew me to the Culinaria series. It's the essence of where it comes from and it tells you what the traditional dishes of, like, Denmark are.

Look at this first edition of the Noma book. There isn't even a publication date - I think it was probably self-published. It's such a personal and regional cuisine, so you aren't going to replicate it. Like this recipe "Shrimp from Greenland with Green Strawberries." I think the thing about something like this, is that you're not thinking about how to redo it, but you read the recipe and get inspiration from it. It's some sort of juice, it's kind of a twist on a ceviche or a crudo, so I'd maybe clarify some type of juice and maybe make it with spot prawns. A brothy ceviche - that sounds kind of cool.

Do you collect anything else?
Shoes.
—Sonja Groset

Editor markup for Stowell Cookbook. This is only visible in the story editor.