Share All sharing options for: Tracy Smaciarz of Heritage Meats on Real Butchery and Growing the Family Business 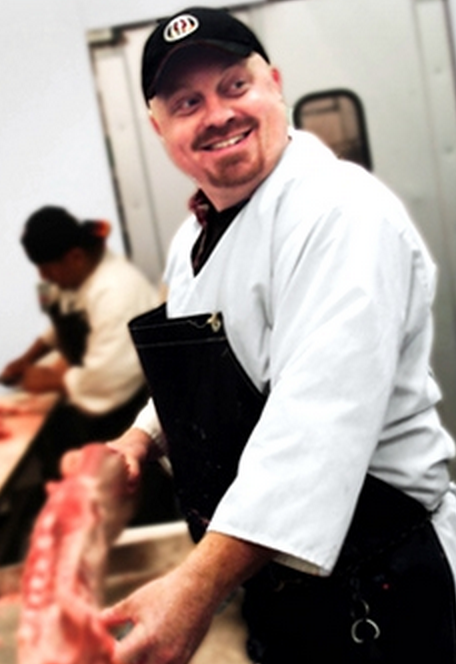 In 1977, Tracy Smaciarz's father started East Olympia Meats as a part-time side project while he was a meat cutter at Safeway. Having raised and processed his own meat for sometime, Tracy's dad often brought his son into the house adjacent garage to work in the family trade, cutting meat for local farmers. They acquired a mobile slaughterhouse, adding another layer to the business and making more work for the family. In fact, one of Tracy's earliest memories is of his grandfather asking him to hold a hoof at age four while he skinned a steer.

Now the sole proprietor of Heritage Meats in Rochester, WA, butcher Tracy has developed a reputation as one of the best in the country, with his meats and services in high demand. Eater chatted up the knife-wielding fella to find out what he likes to cut and eat, where you can get his meat, and what's keeping him in the business after all these years.

You must have some funny stories about meat, yeah?
Yeah, you meet some interesting people, go to some interesting farms when you're in the business. I remember one time, when I was eight or nine years old, I went to one farm with my dad. He told me to go back to the back corner of the house, because that's where the hogs lived, under the house. And he said to crawl down under it, so that when the hogs heard me, they'd run out front. And they did, and he shot them when they ran out.

There was another farm, where they had the steers in the field, but they knew we were coming, so we'd have to park far down the road and walk up to them. The cows would recognize the sound of the truck, so we'd have to shoot them in the pasture and then walk back and get the truck to drive out to the field.

So, your grandfather was a butcher as well?
No, but he would raise beef and cut them up at his farm in Pe El, Washington. My great grandfather, too. He emigrated from Poland in the 1920s and raised cows as well.

Were you always in the business? Ever since you were a kid?
No, I grew up helping out, learning the trade, but it was hard work, not real glamorous, and at age 16, I got out. I didn't want to kill cows and clean the shop anymore. So, my first job was at the pro shop on a golf course (laughs). Then I graduated junior college, and somehow ended back helping my dad for a few years, from around 21 to 23. He was old, old school, and we couldn't work together much more than that. So I was at the phone company for a while, living in Bellevue, doing underground cable work. I wasn't happy, and my girlfriend at the time said, "why don't you take over your dad's business?" And that's all it took (laughs).

I was 27 and I was in the shop, and customers would ask these really tough questions about slaughtering and cooking and such…and I just knew the answer. He had five employees working for him at the time, and they were all shocked I could just roll these answers out so easily, and that's when I realized I just knew it, and this is what I needed to be doing. My dad retired in 1997, and now I have 13 employees and I've tripled the operation.

You say it's different now. How has your business changed?
Besides being a lot bigger, our main focus now is with the USDA meat processing. I work with restaurants and grocers and have products going out to a lot more now. We have our products in Olympia Food Co-Op, Tacoma Food Co-Op, Full Circle Farm, Terra Organics, Grand Central Bakery, Rain Shadow, at Canlis weekly, Terra Cole Butchery, Terra Plata, Uneeda Burger, Revel, a lot with Brimmer & Heeltap, some websales, with Matt Lewis, and Aaron Willis and Derek at Delicatus…it's blown up and I'm so honored.

You're doing something with Delicatus, right?
Yeah, they just came down recently to consult about their meat program, and I'll be doing the roast beef, pastrami, and corned beef for them. I showed them techniques on curing and tumbling with a vacuum tumbler. I can do larger portions for them under USDA inspection, and they're using it in house and selling it out the door as well. 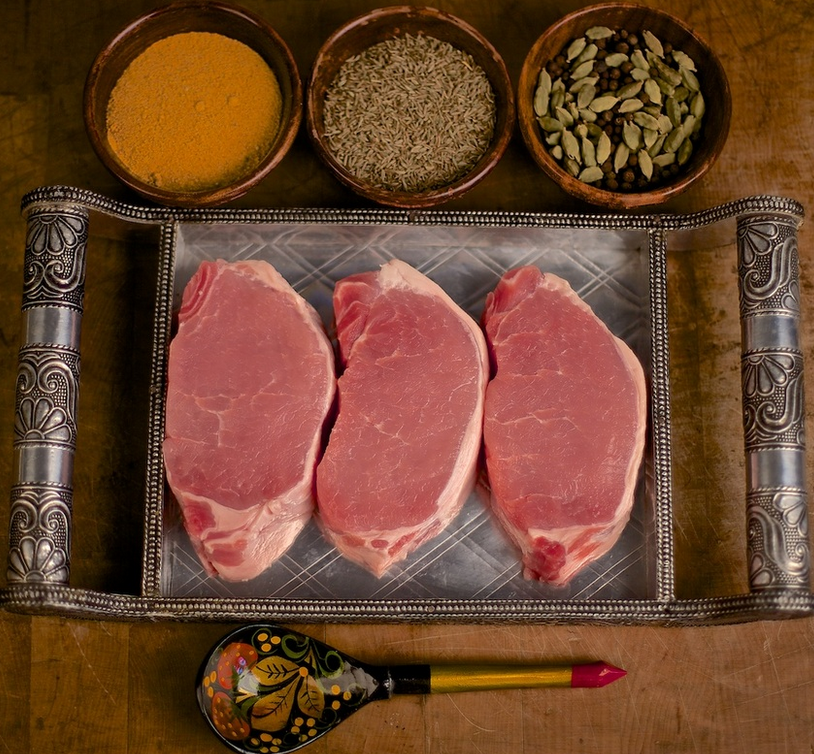 What other projects do you have in the works?
I just started making bacon under USDA inspection, an apple cider bacon. No one in the area is doing bacon for small producers or growers, with direct marketing. It's a cold-cured bacon, all natural, with Jerry Foster's pork. It'll be available soon, and with an organic certification in about six months. I'm also doing USDA chicken sausage--tequila lime, mango-ginger-habanero, bratwurst—and Full Circle Farms will be the first to distribute it.

Rad. So, you've done game, beef, pork, chicken, lamb…do you have a favorite meat to cut and eat?
Beef, by far. I've always been a big beef eater; my family has been processing cows for years. Just the texture, the look, the bold flavors…the combination of cutting and cooking it, knowing how it's been treated and fed, it gives me a lot of pride and satisfaction. There's just something about cattle, too. I can look at a carcass and tell if it's going to be great or bad, and really get into the science of it.

Is your 13-year-old son going to take over when you retire?
He says he's a third generation butcher, but he doesn't do much…yet. I don't have him in the shop that much with me like my dad did. It's a different business than when I was a kid, but he comes in when he's with me, every other week. We made elk pepperoni, and he's helped a little here and there…we'll see. He wants to be a chef—he enjoys cooking a lot. He tells me, "I'm going to open a restaurant and you'll supply my meat!" (laughs) He's always been a big meat eater. Even when he was little, itty bitty, like two years old, he'd want to eat dinner with me. He'd stay up until I got home, and then eat the steak off my plate.

Being a butcher has kind of become glamorous in the public eye these days, with chefs and restaurateurs sourcing their own meat and making their own sausage and charcuterie. Are you surprised at all?
You know, since I've started meeting all these up-and-coming butchers, I have respect for them, but there are some that are gaining notoriety...without ever having made a living actually cutting meat. The other guys like me who've always cut a few thousand pounds of meat find it funny, because these aren't real butchers. A lot of them, where they're coming from is different. They're focused on the butchery, retail, charcuterie, and cooking sides of things. I can't cook like they can, but they're not real butchers.

I know so much about the industry at this point, I just never thought growing up that anyone would ever care. I didn't realize how much knowledge I have about meat and how it becomes food, and it's just so flattering and interesting that people care all of a sudden.
—Julia Wayne
[Photos: Heritage Meats]
· Heritage Meats [Official Site]
· All Five Days of Meat 2014 Coverage [-ESEA-]