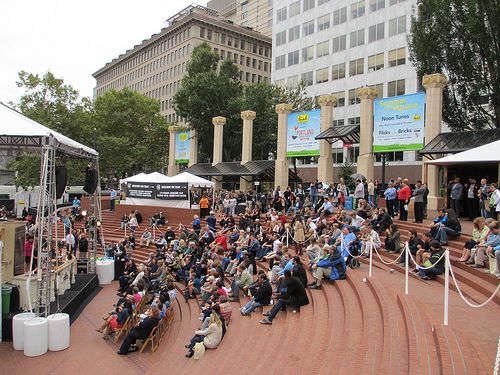 PORTLAND— Need an excuse to head down to Portland? The third-annual Feast Portland food festival will take over the town September 18 to 21, and while many marquee events are sold out, tickets are still available to tastings like the Thursday-evening Sandwich Invitational and Saturday night's High Comfort. But if you're feeling lucky, Eater PDX is giving away two pairs of tickets: One set gets winners access to the Oregon Bounty Grand Tasting, the other to an afternoon Beans and Booze tasting panel. Head over to learn how to enter. [EPDX]

VANCOUVER— A double whammy of photo interludes from Rain City, first, enjoy photos from the 20th anniversary of the annual Feast of Fields celebration of BC's bounty. When Farm Folk and City Folk get together the results can be delicious. Next up, another day, another Vancouver brewery is set to open, coming soon to 2nd and Quebec, the Steel Toad Brewpub and Dining Room. We take a sneak peek inside before it opens. [EVAN]

PORTLAND— Speaking of trips to Portland, the PDX International Airport is getting a major culinary makeover. The biggest game-changer: an airport location of chefs Adam and Jackie Sappington's popular SE restaurant the Country Cat. The menu hasn't been finalized yet, but a Country Cat outpost could represent a huge upgrade in terms of PDX's breakfast offerings (skillet-fried chicken and braised-beef hash at the airport? Major). [EPDX]

VANCOUVER— Oh so much change right now in the world of Vancouver restaurants: the new chef is named at Bambudda and it's none other than ex Top Chef contestant, (and now ex-Parker chef) Curtis Luk. Over in the West End, Chef Henry Besser Rosenberg is leaving Buckstop to be replaced by Casmir Macdonald. [EVAN]