Share All sharing options for: Cookbooks Were Culinary School for Jason Stratton

Welcome back to Book Club, a monthly column in which Eater contributor Sonja Groset talks to all manner of food professionals about their cookbook collections.

Jason Stratton, chef of restaurants Spinasse, Artusi, and Vespolina (formerly Aragona), has been working in kitchens and collecting cookbooks since he was a teenager. Eater sat down with him recently to check out his collection and learn about his favorite cookbooks.

What was your first cookbook?

It's hard to say. Growing up, we had a ton of books in the house—I was a voracious reader, I read everything-including cereal boxes. I found cookbooks to be fascinating. I love food-even at an early age, I loved food. Bruce Naftaly gave me Julia Child's Mastering the Art of French Cooking when I graduated from high school. I started working as a dishwasher for him at Le Gourmand when I was 16. It's a classic-and was an important book for teaching Americans about classic French cooking. Bruce thought I should own it, and gave me one of his copies of the book.

I didn't go to culinary school. In a lot of ways books are escapist, but can also be very instructive. Once I started really reading cookbooks, I think it taught me how much more I could learn, which was an exciting thing. So no culinary school, but I read a lot, and have worked with some really great chefs.

You have quite a few titles about food history—tell us about those.

I have always been fascinated with food history—like how cuisine has developed, and why it's evolved the way it has. I think a lot of people take for granted how important food is to things like cultural identity, and also how it has completely shaped history. Take salt for instance, and the discovery that it was something vital our bodies needed. Or farro—it was this super nutritious grain that essentially allowed the Roman Empire to conquer and expand as far as it did. Farro was, and is, nutritious, you can grow it anywhere, and it was easy to carry. That to me is fascinating.

Do you pick up a lot of books when you travel?

In Europe, book design is different and in some ways much more beautiful. Like this book Artusi, that gave my restaurant its name. When we were thinking about what to do as companion to Spinasse, this book provided a lot of inspiration. It has a lot about the culture of Italy and cultural nationalism. This was one of the first cookbooks published after Italy was unified, so it incorporates recipes from the South to the North, so anyone living in any part of the country can read this and know that this is their Italy. 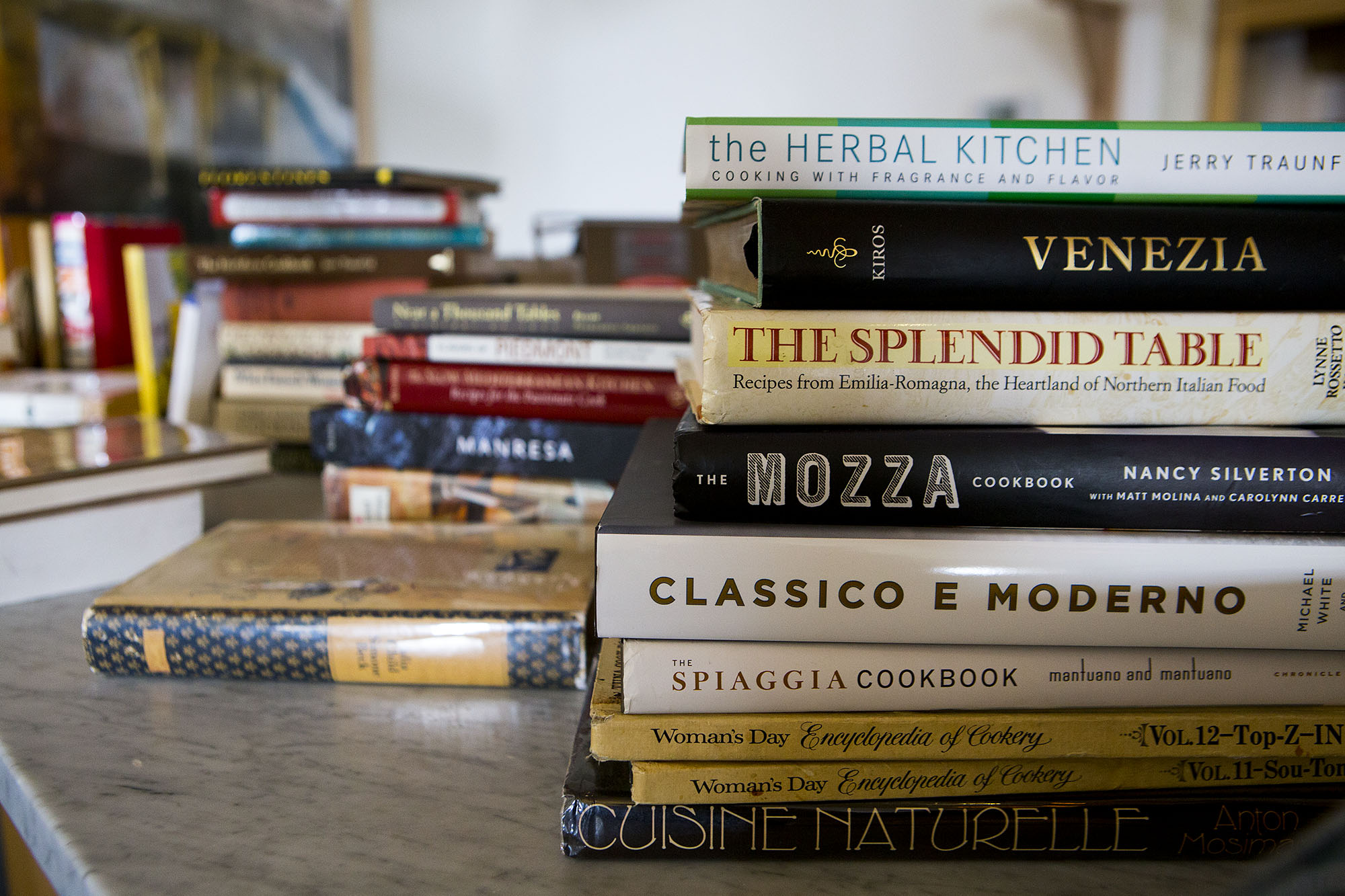 Most of your cookbooks are of foreign cuisine—a lot of French, Spanish and Italian. What are your favorites?

I've gone through sort of two phases in my cooking. When I started, it was all about French cuisine and French technique, and understanding what that was. Even through that though, I was much less interested in the refined, Escoffier-style cooking, and more interested in that kind of rustic, grandmother's cooking. Like these books, When French Women Cookand The Cooking of Southwest France. When I went to Spain for the first time and discovered more food like that, it was very exciting—there was nothing really like it here. I think that's what ultimately drew me to Italian food—it was the closest I felt to that delicious, carefully made, and kind of simple food.

Any books that really take you back to a particular moment in your career?

This Jean-Louis Paladin book, Jean-Louis Cooking With the Seasons—he is rightfully super important in the development of American cuisine, as well as what French cuisine is here. I remember at the time, I was so fascinated with French cuisine, and was reading and trying to learn as much as I could. At the time, I was like, ‘This is such a beautiful book, I have to buy it.' But it's all very manipulated, very nouvelle cuisine, and exacting technique. At the time I was anti-appreciating that kind of food, and thinking why would anyone cook or eat like that? But looking at this book today, it's such a treasure. He talks a lot about seasonality and sourcing ingredients—this was published in the early 1980s, and those ideas are so much a part of how we cook today. I can even appreciate some of the over the top presentation-even if at the time I didn't quite understand it.

What about current cookbook titles?

This Astrance: A Cook's Book cookbook is a kind of fine dining that is three Michelin stars, very exacting. There are these interesting techniques and points of view, that even if I will never cook like this, or am even super into eating it, there are definitely things about studying a different point of view that you can pull out and use. Besides just being beautiful.

How about cookbooks from Seattle chefs, I see you have Jerry Traunfeld's cookbooks.

Back when I was working at Le Gourmand, Jerry (former Herbfarm chef; chef/owner, Poppy) was the other chef besides Bruce (Naftaly) that was known for Northwest cuisine. And you know, Bruce is very humble and rarely talks himself up. With Jerry, I was always a little bit "Jerry!" he got all the accolades and recognition. Someone gave me the Herbfarm Cookbook though, and it's full of amazing techniques, recipes, and points of view. It was interesting to later walk in and work for Jerry. I kind of had a jump start on his style and techniques. That was pretty fascinating—after working with him, I have a better understanding of that food and appreciation for him. He in fact taught me a great deal.

Any plans for a cookbook of your own?

We just celebrated six years of Spinasse, so it's fun to look back at your notebooks and see what we were cooking that first year. I'd like to collect that into a book, and for people that know and love Spinasse, it'd be an interesting thing. So it's in the works. It's just a matter of finding time.

What about some of the essay style books about food and food history in your collection?

I really like the writing of Elizabeth David, A.J. Liebling, and MFK Fisher. They are all incredible writers. But there are books I have like this collection of recipes from the House of Alba in Spain—it provides recipes that the royals had their cooks make all the way up to the 20th century. You get this insight into how they were eating through the generations. It's a fascinating snapshot into kings, but then you also realize they eat stuff that is really banal. There are foods that are so simple-like this Genovese tart, it would have been very fashionable at the time-kind of a status symbol. But today, it's just a vegetable tart.

What are some of your favorite books?

I love The Splendid Table by Lynne Rossetto Kasper-it really dives into the food Emilia-Romagna, she has like five different recipes for ragu, and one is from the Middle Ages. She's just so passionate about that cuisine. Cuisine of Southwest France by Paula Wolfert is another. She is such a great journalist and really explains the origins and evolution of different dishes. Cooking by Hand by Paul Bertolli is another favorite.

This Dali book though is one of my favorites for other reasons though. Sara Moot at Le Gourmand gave this to me. She was the person that taught me how to open a bottle of wine! Her and I share an interest in books, and that really opened me up to the restaurant family there. Bruce is very scholarly, too, so we'd often talk about fiction or other books we were reading, or art, or opera. Several years ago, Sara was downsizing and gave me this book. Les Diners De Gala, Dali's muse. Dali was a total esthete and epicurean, so he loved the decadence and richness of food, and appreciated culturally and psychologically how food is important to us. It's something he incorporated into his art. So dishes he thought were incredibly deluxe or decadent, or that fed order for his muse. Some are over the top, while others are simple, like this beef and onion stew.

And it's just a beautiful book, all these drawings and etchings. And it's really well written and funny! There is so much about the way I live my life that intersects food, art, music, so a document like this is particularly wonderful—it has all the things that I care about, and really shows how they all overlap.