The Hottest New Restaurants in the Seattle Area, December 2022

Dine Comfortably With a Newborn at These Welcoming Seattle Restaurants

Today Eater welcomes its new columnist, Seattle's own Surly Gourmand. Surly will be mapping his exploits and sharing them right here. Brace yourselves. 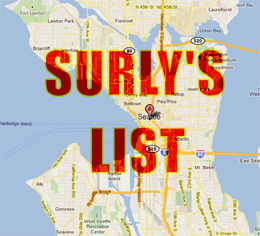 If you think that there's anything more delicious than General Tso's Chicken, you're a liar and a disgrace to your family, and you should beg forgiveness from Jesus, or Bob Barker, or some other such authority figure. If I had my way I would sleep on a gigantic pile of the General, then train myself to make chewing motions in my sleep so I could eat it 24 hours a day.

Along with fellow gourmands Matthew Amster-Burton, Mark Schermerhorn, Henry Lo, and Langdon Cook, I recently hit the streets on a quest, dubbed General Tso's death march, to find the best version in Seattle. What follows is a list of some tasty versions of the General. And some really, really, really shitty ones.